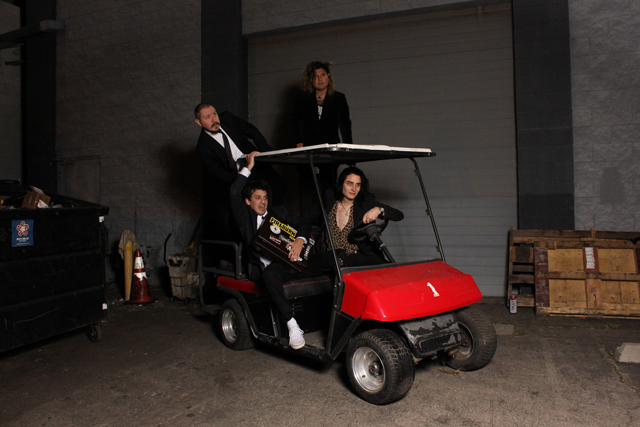 Metal Inside(r) Home Quarantine is Metal Insider’s new column during this time of isolation due to the COVID-19 pandemic. We asked artists five questions on what’s been keeping them busy ranging from their favorite movies, food they’ve been eating, music they’ve been listening to and more. We caught up with ACxDC’s Sergio Amalfitano as he’s been spending this time keeping busy on personal projects around the house.

I’ve been keeping busy on personal projects around the house. Getting my old photography and DJ gear fixed up. Teaching my kids Spanish. Keeping up a garden. A lot of researching for weird merch stuff I’d like to do in the future. Opened up my online store. Little projects here and there to spend some busy time. A lot of cooking as well!

For the most part at the house I tend to listen to oldies. I have a soul club that I run so I’ve been making mixtapes/ spotify playlists of old lowrider oldies, spanish ballads, funk/ soul, freestyle, hip hop, etc. I tend to listen to punk and heavier stuff while I work but my print shop has slowed down significantly.

Yea I haven’t been able to find yeast since everyone is a bread maker now! I’ve been vegan for 20 years but recently realized I’ve gotten a little too comfortable with fake meats and frying everything. So lately I’ve been trying to spruce up salads, smoothies, and cooking a lot with my airfryer. Limiting the amount of processed meats and foods in general. It’s difficult since produce goes bad so much faster but I’ve made some pretty good low/no oil meals with nothing but veggies. It’s kind of a fun challenge hiding veggies in my kids meals too!

I rewatched all of the original Planet of The Apes. Also rewatching Snowpiercer, Train to Busan, Hedwig and The Angry Inch, The Birdcage, and Disney movies. We bought tons of board games. Loteria, Uno, Twister, Yahtzee, Jenga, Clue, Life, LCR, Villainous, One Night Ultimate Werewolf, etc. I also fixed up my fixie so I’ve been trying to ride my bike a lot more. My kids like watching The Masked Singer.

Keep a schedule if you can so you have a sense of normalcy/time. Finish up old projects that you’ve had on the backburner. Maybe start new ones you’ve been wanting to try. It always helps me to write down lists. Drive around just to get out of the house. Listen to music in the car. Take some time to call friends and family just to check in. Video conference if you can. Don’t eat out of boredom!