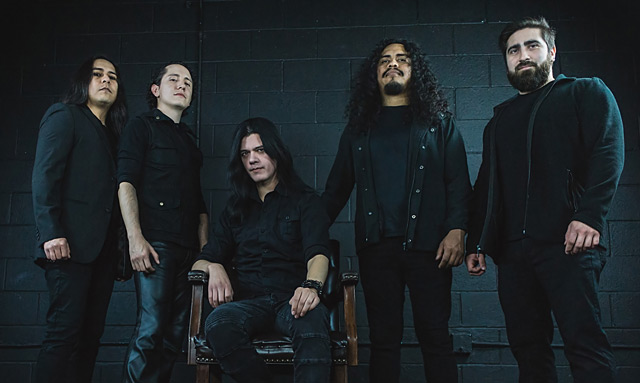 Metal Inside(r) Home Quarantine is Metal Insider’s new column during this time of isolation due to the COVID-19 pandemic. We asked artists five questions on what’s been keeping them busy ranging from their favorite movies, food they’ve been eating, music they’ve been listening to and more. We caught up with Anthea singer/keyboardist Diego Valadez as he’s been spending this time going on hikes.

So before the quarantine, our upcoming record was simply going to be a 5 song EP. Having all of this extra free time allowed us to make some more music, turning “Illusion” into a full-length album which we’re very excited about! On a personal level, I’ve been enjoying going on hikes and being out in nature. I’ve also been catching up with a lot of old friends from around the world via video chats. And of course, plenty of movies!

For sure!  Strangely enough, 2020 has been a pretty great year for new music in my opinion! Of course, I love symphonic metal and really dug the new albums from bands like Delain, Nightwish, and Beyond the Black as well as a ton of other metal bands like Aenimus, Lord of the Lost, Hinayana, Sojourner, Tetrarch, I could go on all day! But I don’t limit myself to just one genre. Lately, I’ve also really been into The Weekend, Caravan Palace, Blaqk Audio, the Claypool Lennon Delirium, and too many others to list. If you’re looking for some awesome new bands, I highly recommend checking out the “New Blood” playlist on Spotify! There are also a lot of metal and rock bands releasing debut and sophomore albums through Rockshots Records that are definitely worth checking out! In/Vertigo, Viktoria K, and From the Depth are all great examples!

Before the quarantine, I was already a vegetarian however I’ve been using this time to experiment more with vegan dishes. I’m amazed at how good so many of the meat and dairy substitutes have become! One of my personal favorite treats has been making myself these vegan breakfast burritos using JUST EGG substitute, Morning Star sausage and bacon substitutes, Daiya cheese substitute, and of course salsa, rice, beans, cilantro, and seasoning.  But I have to make sure that I don’t make something like that too often of course haha

I wasn’t able to go to the movies much last year so I have definitely been spending a lot of time catching up on everything that I missed! Some stand out movies for me have been the Invisible Man, Midsommar, Shazam, and surprisingly the Child’s Play remake! But I do think that TV is where it’s at these days. I thought the Mandalorian, and The Dark Crystal were both brilliant as well as some other shows that I’ve finally been checking out like Ash Vs. The Evil Dead and Cobra Kai. As for books, I just finished “The Martian” by Andy Weir which was great and it inspired me to re-read one of my personal favorites “Contact” by Carl Sagan. I’ve gone full throwback when it comes to gaming. At the start of the pandemic, I got myself the NES (Famicom), Super Nintendo (Super Famicom), and Sega Genesis (Mega Drive) mini consoles so I have basically been having a lot of nostalgic gaming moments. I also got a Playstation VR last year and it has been a lifesaver. I may not be able to go anywhere in the real world so virtual reality it is!

Use this time to your advantage if you’re able to. Write that album, work on that novel, paint, whatever creative project that you normally wouldn’t have the time for, now is your moment to make it happen. But more important than that, keep in contact or reconnect with friends and family. And I don’t mean sending a text, really talk on the phone, or video chat, now is the time to be more connected while we’re apart. Despite spending most of my time in my apartment, I feel like I’ve been very social. I highly recommend video happy hours/ hangouts. You might be surprised just how much they can really help during this period of isolation.