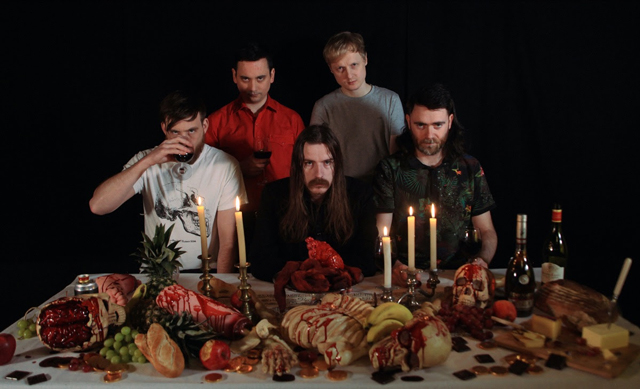 Me and my lovely partner Emma started off the lockdown with a list of things to do, which included the likes of “Make up a Dance Routine,” “Finish Jigsaw Puzzle,” “Chop up Onions and peppers for the freezer,” “Watch Wife Swap USA,” “Try to avoid a news overload” and “Eat as many chicken flavored crisps as possible”…. “Cows”(?) etc… Alongside working through this really important list, I’ve also been playing a lot of PS4 – GTA 5, FIFA 20 and Uncharted 4 mainly, plus I’ve been teaming up online with Adam (Pigsx7 Guitar) and loads of other friends to play a lot of Call of Duty Warzone and Fortnite. If anyone wants to join us for some online shoot-ups, drop us a line! Also, if you want to play Swine FC on Fifa Ultimate Team, give me a shout! I’ve been focussing a lot of attention on building a team of Newcastle legends…

I’ve also been taking bass requests on my instagram account which has brought up some interesting results! I’ve learned how to play Africa by Toto, Wise Guy by Joe Pesci, Cry Me A River by Justin Timberlake, Love Me Like a Reptile by Motorhead, Call Me Al by Paul Simon and Keep on Movin by Five and loads more. A very mixed bag but It’s helping me pass the time haha. I still have quite a few requests to work through, plenty to do. I’ve also been having regular  daily contact with my family on whatsapp. We all “visited the RijksMuseum in Amsterdam together on Zoom, which was lovely. We all share meditation videos, positive talks, recipes, health tips etc… with each other most days. I think that’s been extremely beneficial for us all so far. There’s also been a weekly quiz with Friends and family which has been great fun.

The lockdown has been a perfect opportunity to work through my record collection, not that I need much of an excuse! But I’ve been digging a little deeper and listening to the records which haven’t had my full attention for a while, a few highlights being:

Who is William Onyeabor?

George Benson – Give Me The Night

There’s too many to mention! Also, all five Pigs Pigs Pigs Pigs Pigs Pigs Pigs members have made a playlist of tracks we each love, which will be going up on our Spotify account soon. Keep an eye on our socials for more details! Expect a huge mixture of treats for the ear holes.

I’ve been making a lot of soups, chilies, lasagnas, dahls and plenty of variations of ramen with Emma, plus anything vegan, particularly the discovery of Vegan Richmond sausages, oh my fucking god yes. To be honest, the greatest discovery i’ve made so far was kind of a mistake. We’ve been getting our “big shop” delivered to the house due to the covid. As a result, i’m sure a lot of people will have had this, but items are quite often being replaced for other items due to the lack of supply. I decided to treat myself one week by ordering some ‘Kinder Delice’, which is a kind of small Kinder cake bar, unfortunately they weren’t in stock and were replaced with “Kinder Milk Slices’ instead… which are far less superior in my opinion. How could I make them more appealing I thought…? I ended up putting one in the freezer as a bit of a test, turns out they are amazing when frozen. So aside from all of the delicious food me and Emma have been making, the frozen Kinder Milk Slices win first prize! Also a shout out to Roberta for the “Crisps pushed into Cheese on Toast” suggestion, it was a lovely experience.

Aside from all the PS4 games i’ve already mentioned, the highlights so far have been ZZ Top – little ol band from Texas, The Madalorian, Cannibal Corpse – The making of The Wretched Spawn on YouTube, Peep Show, Father Ted and of course, Wife Swap USA. I’ve got a bit of a thing for vintage episodes of Bullseye and Who Wants To Be A Millionaire too, so lots of that plus reruns of Flog It. I actually put out a request on Facebook for good music documentaries to  watch a couple of weeks ago, the response was pretty mind blowing, there were over 100 comments with a load of great suggestions, here’s a bit of an overview for anyone looking for some tips!

Rush: Beyond The Lighted Stage

Scream For Me Sarajevo

Bros – After the screaming stops

All things must pass: The Rise and Fall of Tower Records

Cosmic Psychos – Blokes You Can Trust

The Flaming Lips – The Fearless Freaks

The list goes on and on… Lots of excellent suggestions. I think I need to put them all in a spreadsheet and work my way through them. It may just get me through lockdown!

I’ve also just watched a show called A Very British Lockdown: Diaries from the front line, which actually very briefly features my amazing sister Kitty, who has just given birth to a very cute and healthy baby boy, Corey. The show documented people’s lives through the beginning of the lockdown in the UK and a couple of short segments with Kitty talking about her imminent labor and gratitude for the NHS. It actually hit me very hard, I realized early on in the show that It was the first time I’d allowed myself to watch anything real relating to what’s going on in the world right now, and seeing my sister in tears at the start really got me. Thankfully she’s at home now and everything is OK, but she had a scary few days in the hospital away from all family and friends. It was pretty stark seeing beyond my own 4 walls and into the real world for 45 minutes. Kitty, you are incredible! I’ve also been reading Hells angels by Hunter S Thomson.

Just try to keep yourself as happy and healthy as you can. Keep in touch with and check in with all your loved ones as much as you can too. It’s bloody rough, but we will get through it! Work your way through the music documentaries I’ve been suggested, plus the Pigsx7 members playlists which will be up soon 🙂 STAY SAFE!

Johnny answered these questions before the death of George Floyd and the worldwide protesting surrounding his passing on May 25th. The group has teamed up with Bandcamp as proceeds to their digital back catalog will be donated to Campaign Zero, who are fighting against Police Brutality in the U.S.

“For the next week our digital back catalogue is ‘Pay What You Want’ on Bandcamp and all money will be donated to Campaign Zero who are fighting to end Police Brutality in the US.”