It’s been two years since Darkest Hour’s self-titled album was released on Sumerian. Three years before that, The Human Romance was released on eOne. From 2001-2011, they were on Victory. And for their next one, they’ll be going it alone. Yesterday, the D.C. band announced a $50,000 campaign via Indiegogo for their ninth album. The band is seeking $50,000 for the next album, which is kind of expensive for a limited 30-day crowdfunding campaign, but not all that expensive in the grand scheme of a heritage band recording an album. In less than a day, they’ve already raised over $8,500, so they’re well on their way to meeting their goal.

Of course, you need interesting perks for something like this, and the band deliver.They include Party Scars and Prison Bars, a film documenting their 20th anniversary. There’s also a DVD of the band playing their 20th Anniversary Undoing Ruin set at the Black Cat in Washington DC. Other perks include a complete transcription of the new album, limited vinyl and extend all the way to a limited edition guitar and an EVH guitar amp used on the album. Here’s their Indiegogo pitch:

With your support we’ve been able to release: 1 demo, 2 EP’s, 8 full-length albums, have our music appear in video games, major motion pictures, participate in countless tours and perform all over world – spanning 6 continents.

The most incredible part of this journey has been the ability to connect with so many people on an individual level. It’s in keeping with this spirit that we are proud to announce our plan to independently release Darkest Hour’s 9th studio album.

We started this band releasing our own music.  Therefore, to do so now with modern tools and on our own terms is as much of a nod to the past as it is a look into the future. Your pre-order will go directly towards the creation, production and distribution of the album itself.

Those who contribute will receive continued updates via email and video web-i-sodes (remember those?!). As an extra gift to all supporters, we will be offering this never-before-seen Thrashography Sequel “Party Scars and Prison Bars: Two and a Half.”

The good people at Media-Phi and Indie Life Media followed us all over the world, documenting every step of our  20th Anniversary Tour in 2015, which includes multi-camera live footage, exclusive behind-the-scenes interviews and amazing guest appearances! This film is a perfect addendum to the story so far and we’re happy to provide this, and many more killer videos, for you all.

In fact, those who preorder the CD/DVD option will receive our full 20th Anniversary Undoing Ruin live set, filmed at the Black Cat in Washington, DC. This is the first time that we have ever released a full-set, live video of the band and we’re happy to show you all how we like to party in DC.

Some of our favorite bands and artists have paved the way for us by independently releasing and distributing their own albums. We are more than happy to carry on the tradition; after all, connecting directly with you feels like home to us.

Time is limited as this is a 30-day campaign. Please be a part of making history with us by picking up one of the options below. Help us make the nastiest, no-holds-barred, shreddiest, riffingist, most CRUSHING album in our catalog, allowing the only outside influence to be you, the supporters! Thanks in advance, we can’t wait to unleash this album on your ear-holes!

If you want to be involved, head on over to their Indiegogo page and check it out. 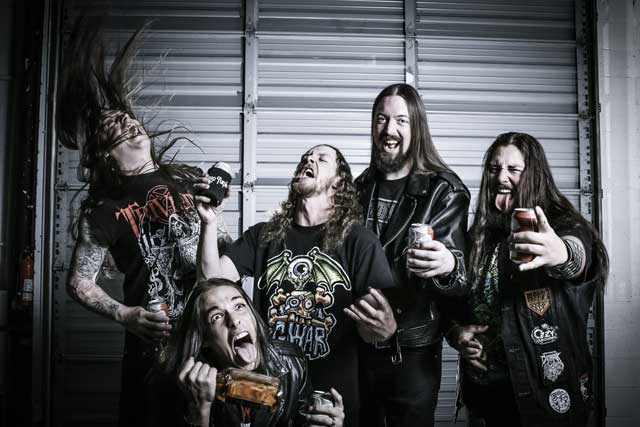