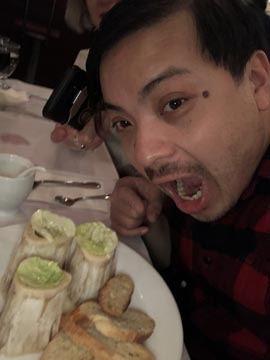 Tonight (13th) Primitive Weapons will wrap up their tour with Cult Leader and God Mother in Atlanta, GA in support of their latest effort, Surrender Yourself. For this particular run, we brought back Metal Insider’s “Eating It Up” column as the group has already shared food diary part 1. Now, just as their trek is about to come to a close, they shared entries 2 and 3, which involves late night fancy French cuisine, burger joints, amazing pickles in a jar, Mexican, and more.

The Primitive Weapons food tour continues. Since our last tour diary, we’ve had the pleasure of enjoying some amazing late night French food at L’Express in Montreal. After a sweaty, packed rock show, you usually think bar food, fast food but no…. we went classy, well depending on how you define classy. The band and our local friends were pretty fucking drunk but that didn’t stop us from ordering snails, steaks, bone barrow and more negronis, wine and old fashioned cocktails at the only restaurant nearby open until 3am. That’s how we roll. The restaurant also had some amazing pickles in a jar that we may have had at least 250 of. It’s a miracle that we were able to wake up and play the next day in Connecticut.

Fast forward to Ortlieb’s in Philadelphia, PA. Another packed show This has a dope punk rock vibe without being too crusty. In fact they have amazing Mexican food. Highly recommended if you’re looking to discover dope underground bands but also if you just want a Tecate and some dope tacos!

It’s cold as fuck out here, so Primitive Weapons are doing a great job of fattening ourselves up on everything we can sink our teeth into and keeping our blood warm with lots of Tullamore Dew! I imagine we will finish our night at Pat’s w/ some good old fashioned Philly Cheesesteaks! Next up Boston!

Hopewell in Allston, MA is a regular stop when playing Great Scott. More steaks and cocktails. Considering how poor this band is, we sure do love living it up on the road. I can only imagine what our tours would be like if we were successful haha. After fueling up on some grub, we kicked Boston’s ass. It was one of our best shows of tour.

Next up was our hometown, Brooklyn, NY at Saint Vitus Bar. Sold out show and long epic night of hangs with great friends. Not much food was had on this day. We fueled up with lots of caffeine at Champion coffee, where we did a Kerrang! interview and spent much of the night with a nice diet of free whiskey and bud light. I personally enjoyed some Taqueria Diana in Williamsburg, Brooklyn…a recent favorite late night spot of mine. Highly recommended for late night parties and touring bands that need to grab a bite of epic proportions at a modest price. They even have a bar if you feel like you haven’t had enough.

We played one of the last shows ever at the legendary Ottobar and enjoyed their craft beer selection. In case you can’t tell, the collective band enjoy the booze… Afterwards, we stayed at the Omni Hotel in Washington, DC where we literally lived and ate like politicians for a few hours. According to the bell hop, several members of the Bush family stayed here during last weeks funeral. We woke up and ate an extravagant lunch consisting of crab bisque, meatloaf, omelettes and more. All the while, sitting next to many folks that looked like politicians and news reporters.

Next notable food stop was Baltimore at Cobra Cabana, a spot owned/run by members of Valiant Thor. Booze, tacos, burgers and veggie options. What else do you need? 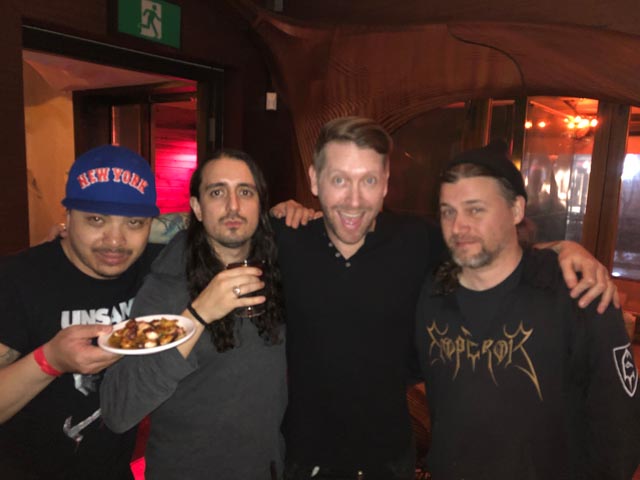