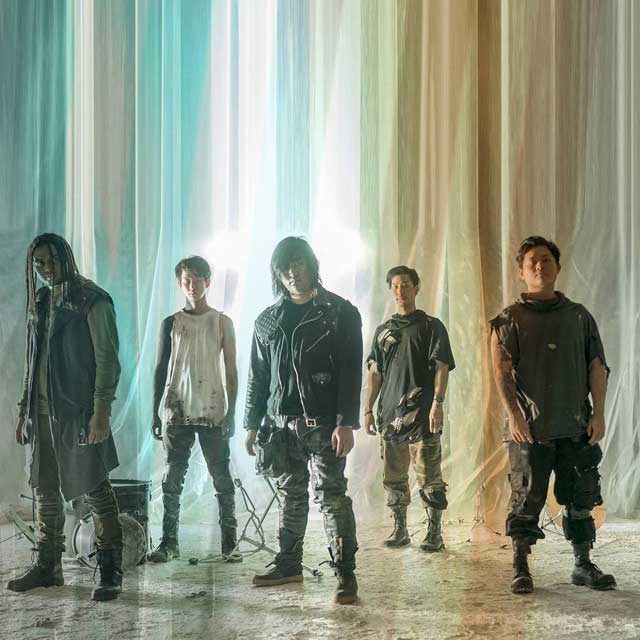 Bangkok, Thailand’s Defying Decay were invited to support Betraying the Martyrs’ first-ever headlining North American tour. Unfortunately, chaos prevailed when the Betraying the Martyrs’ touring van caught fire. The French metallers had no choice but to take the next flight home. However, Defying Decay did everything they could to complete the trek in support of their latest effort, Metamorphosis (order here). We caught up with vocalist/guitarist Jay Euarchukiati and guitarist Howard Fang to discuss their new album, the Bangkok metal scene, and more.

It’s rather unfortunate what happened to this tour when Betraying the Martyrs’ tour van burst into flames. How did you guys pick up the pieces?

Howard Fang: All of us were bummed because Betraying the Martyrs, those guys were so cool to us, especially being the first U.S tour, they were very welcoming to us. There were a lot of cultural barriers, but they were so cool about it. It was just talking to the guys in Within Destruction and Sentinels about continuing to the East Coast. And those guys are hard-working, and they want to do everything that they can to keep playing the shows that they needed to play. They were cool enough to let us join them, and that’s something we’re always going to be fortunate about. The rest of the tour turned out to be good, and we’re really glad that we were able to roll with those guys.

Can you talk more about creating Metamorphosis?

Jay E.: We started towards the end of 2015 or ’16. It was a weird album to write because before the previous material; we were all in the same town, the same city. We went to an International School in Bangkok together, so we’d meet up and write songs together. This album, we started writing when we all went to a university in different parts of the world, literally, so the writing process was different for us. We were bouncing ideas around via emails and stuff like that. We had to see each person’s perspective, on what they like to write, and adding a song together and making them like what they are.

Howard Fang: I think a big part of it was that we were all in different areas of the world, and experiencing different things. People were going through different phases of life. So Metamorphosis itself is a collection, a snapshot of everyone’s lifestyle at that time, made into a listenable album. That’s what, for me, it personal and made it very special for us.

How has the response been so far?

Jay E.: It’s been pretty good. We appreciate it. People are enjoying our record, and we enjoy performing for people, especially this tour. We had a lot of fun playing each night in a different city and meeting new people. The fact that we come from Thailand, it’s something really special for us, because not too many bands come from that side of the world and come to perform in the U.S. And the response has been great.

Howard Fang: Metamorphosis is such a mix of different sounds and genres. I think people who do have open minds about this kind of music would gravitate towards our sound. We received a lot of compliments about the diversity of our music, including the different styles of metal. And not even just metal, electronics influences, hip hop influences…

Howard Fang: Yeah, exactly. Pop influences. I think it has been received pretty well, but of course, you still have the people who want the heavy things, which, as much as we like the heavy aspect of music, we wanted to expand a little more. And fans who still stick with us can appreciate that, and that’s what we’re grateful for.

Jay E.: The metal scene in Thailand is really small. The reason you probably are hearing a lot of American influences is because that’s the music we grew up listening to. We grew up with nu-metal and that era. Nu metal was really big in Thailand. It used to be big, the music scene, but now, after 2009, the music scene has gotten a lot smaller because most people who were enjoying metal just grew up, and they’re not there anymore. Most people, or kids now, they are listening to some other stuff like hip hop, so it’s not there anymore. But we’re still in the era of the nu-metal. American nu-metal was just big like Linkin Park was like a K-pop band in Thailand. It was everywhere. Even like kids up in the mountains and in urban parts of the country would know them and enjoy them.

Do you guys have a favorite metal band from Thailand?

Howard Fang: I’m a big fan of Thai metal. A lot of my favorite bands are actually from Thailand, so like my boys from Annalynn, they’re awesome. Retrospect, Sweet Mullet, and just so many more. We’ve played so many shows with them. Each band has a unique style, and you can see their influences, but they do take it to a unique point where they do put their stamp on it and say, “This is our music.” While metal, in general, is not that big in Thailand, the metal scene within it is quite diverse. You have bands of all different kinds of sounds, and that’s where we fit in because we can’t narrow down our sound either. We play what we like, and so does everyone else, and that’s cool.

Jay E.: There’s a lot of metal bands from Thailand I enjoy as well, like Retrospect and Sweet Mullet. The only difference, I guess, is it’s not mainstream, because the music industry in Thailand is quite different from other parts of the world, as in, they have a policy where the lyrics have to be in Thai to be on a major label to be played on the radio. So that was limiting.

The politics are different?

Howard Fang:  In this industry, if you wanted to be signed by a label over there, your lyrics would have to be in Thai. And because we’re all English speakers, although some of us do speak Thai. Again, most influences are American, and English is the way that we want to express ourselves. So that kind of puts a limit on us, but that’s just something we have to work with.

Did you guys ever consider making music in the Thai language?

Jay E.: the Thai language is one of those Asian languages where there is a pitch in words. Like saying this word literally in a different pitch could have different meanings. So it’s quite limiting what we can do in terms of lyrics, and it’s a lot harder for us because we all went to international schools.

Can you talk more about your history with Linkin Park? I heard that’s how you guys kind of came together, at a show.

Jay E.: I played music at a young age. Linkin Park just started because I went to see Linkin Park in 2009? I don’t remember. Back then, I just met up with Aston, who was our vocalist back then. I was the guitarist, and that’s how we started the band. It was kind of weird for me because it was the first time going to a metal concert and I went alone. It was a sad thing, so I just met that guy, and we just kept in contact, and we decided to start a band together. And obviously, a lot has changed since then. But, yeah, it is the music I grew up with, and it’s still one of my favorite bands today.

Howard Fang: I think Linkin Park is one of those bands that we all collectively can listen to together. We listen to a lot of different things. I listen to hip hop, Jay’s very electronic and pop, and the other dudes are metal, but Linkin Park is something that we all have a common ground with. And that’s why our music draws a little bit from that sound.

Now that you’re into hip hop, what made you in with metal band?

Howard Fang: My pathway into music was through metal. My first album was All Hope is Gone by Slipknot. That’s the first metal I’ve ever listened to, and that’s what got me into it. So there’s always that internal drive to always want to play heavier music. And hip hop is getting heavier and heavier. There are so many underground acts that incorporate screaming, and their beats are just so heavy. 808s now are so incredibly heavy. We went to a $uicideboy$ concert. It’s a metal show. People are moshing; people are crowd killing, it’s insane. In my point of view, it’s just another way of expressing yourself through very powerful, kind of violent music. It’s very similar, I would say.

What are some of your upcoming? Will you return to the states or do you have any plans of going into other countries that you can reveal?

Jay E.: It’s been an awesome experience. Touring the States is something you can’t do in Asia, the way of touring and getting around, and the people. Things are done very differently, and I love it. I would love to come back. If we have the opportunity to, I’d definitely come back.

Howard Fang: As of now, it’s just planning towards getting more exposure for the album. There’s nothing that we can quite reveal just yet because we’re still working on that. However, we’re always trying to find a way to get back on the road. We love touring, playing shows, so that’s what we’re going to try to do.

Howard Fang: The album itself was quite a long process, and I think a lot of us have changed since then. We probably started writing the material for the album around 2016, and it wasn’t even out until now. Looking back at it now, in retrospect, it’s nostalgic, and it’s quite transparent, the type of people that we were, and what remains and what is different now. For example, for a song, now instead of a guitar solo, maybe we put something else in. Instead of this line, maybe it’s this line. But it’s all just a reflection of who we are now. And looking back, it’s just very interesting to see that development. That’s why I like that album. I know our next album is going to be much more mature.

You already started working on a new album?

Jay E.: There have been songs here and there, and in the setlist, we even threw in songs that we’d written together, recorded, but we don’t have a name for it yet. The thing about this band is we love writing music together. It’s the best thing to do. And we do it all the time, and every time we write a song, it’s something you come up with then and there, and you listen to, it’s great. It’s the best way of keeping a timestamp. Where we’ve been and what we’ve done.

Howard Fang: I like to think of it as tattoos, to be honest. Because I would get a tattoo at a certain point in my life, and I can look at it and remind myself what kind of person I was and who I am now. And even though the person that I am now is not necessarily who I was. It’s a reminder of the changes you’ve gone through. It’s inspiring because, everyday life goes on, but you don’t notice the small details until you can take a broader perspective. And that’s what this album is to us, I’d say.