When Hellyeah first formed in 2001, many were excited about the union of members of Pantera and Mudvayne. As much of a supergroup as they were and are, they went through some lineup changes in 2014 that saw Mudvayne guitarist Greg Tribbett depart the band. He reacted by forming his own supergroup of sorts, Audiotopsy, with Mudvayne’s Matthew McDonough on drums and former Skrape singer Billy Keeton. The band, which is rounded out by bassist Perry Stern, released their debut album Natural Causes, earlier this month. We caught up with Tribbett to talk about the formation of the group, their touring plans, and whether or not we can expect to see Mudvayne again.

How did Audiotopsy come about?
In July of 2013, I gave Matt a call just to say what’s up, and we talked and were like ‘man we should put a band together, why aren’t we playing music?’ I ended up flying up to his house for a weekend and we wrote seven songs in two dayS. We hadn’t played together since 2009 so the creativity was definitely there. And as soon as that happened we knew we had to find a singer and a bass player. I mentioned Billy to him, and we knew him from Skrape touring with Mudvayne back in the day or whatever.

He was taken aback by it, because he was pretty much in retirement, he was playing in cover bands and stuff, but he was totally stoked. He happened to be playing with Perry, our bass player at the time so they came in like a package deal. We went down to Florida to record those seven songs in August of last year, and we just gelled. It came together really quick.

How long have those songs been in the works? You really came up with them in 2 days?

Well I had riff ideas and stuff. I had written most of the songs. I think I ended up coming up with two more songs that weekend for a total of 7 songs. But I’d been sitting around playing. A lot of the songs I had written on acoustic and just transcribed them over to guitar.

Had you been in any bands since Mudvayne’s hiatus aside from Hellyeah?

No. After I left that band I was pretty stable for about a year, gettin’ riffs together and jamming and making the next plan. Thankfully that plan came together. I missed it a lot. I like being on the road, out on tour, playing for the fans. I don’t think I’ve ever had this much time off. It was definitely a wakeup call.. Mudvayne toured back-to-back, Hellyeah toured back-to-back. I literally haven’t had that much time off in 15 years probably.

What’s going on with touring so far? I know you’re planning on doing it quite a bit.

We’re weighing our options right now for October and November I think we’ll probably get out [ed note: they’ll be touring with All That Remains starting next month]. Then we’ll tour ‘til the end of the year then of course probably tour all of next year 2016.

Were there any other vocalists you had in mind or was it automatically Billy?

Yeah, Billy was the first person I thought of. I just remember his vocal sound and all from Skrape and I liked Skrape so I thought he’d be a perfect fit for what we’re writing.

So you kept in touch with him since touring?

I hadn’t talked to him in two or three years before I called him. He’d come out to a Hellyeah show and hung out.

I’m sure you get asked this a lot, and Audiotopsy is certainly a priority right now for you, but has there been any discussion of a Mudvayne reunion?

Yeah. We stay in contact, I still talk to Chad every once in a while. He’s real busy with his touring and stuff. Me and Ryan and Matt got together back in February. Actually, what brought us together was my mom died and Ryan and Matt came to the funeral and we hung out and talked and everything was cool. I mean I have Audiotopsy to do for the next 2 years. I know Chad’s doing another Hellyeah record so anything Mudvayne. I’ve already said it but never say never but it’s probably gonna be another couple years or three. That’s the possibility of doing something.

Would you want to tour with Hellyeah?

Audiotopsy would tour with anybody. I mean that’s up to those guys, if they wanted to bring us out.

Do you have a dream tour, so to speak?

For this band probably, I know Tool’s comin out with a new record. We’d love to go out with Tool. That would be awesome.

What are your thoughts about the Mayhem Festival announcing last week that it’s done?

The Mayhem Festival started out great, but  I think it wore itself out. They were just having a hard time finding headliners, because everybody’s kinda putting their own festivals nowadays. I guess it’s run its course, too bad we didn’t get to play it.

It’s kind of almost a bigger question. Ozzfest was gigantic for a while, now it’s done, Mayhem’s done. There are a lot of standalone festivals like Rock on the Range and Knotfest that are destination festivals. Do you think that’s the way things are going?

I definitely think that’s the way things should go. They should have a lot more festivals in the states like they do in Europe and stuff, ya know? They’ve got Download. they have a ton of festivals in Europe, you can just go over there and tour for like a month and you’re playing all these festivals. That’s what should definitely happen in the States during the summer. I think if they have certain festivals in certain places, people will come out and they could probably put 10 or 20 bands on it instead of one.

In recent years, the way of consuming music is gone more from purchasing to streaming. Do you have any thoughts on that?

It’s basically people getting music for free. People have been debating this forever. All I’m gonna say is if you want your favorite band to be around, you have to support the band otherwise they’ll fail. They have to  have some kind of support, otherwise it’s just not gonna happen for them. Labels are not supporting bands anymore either, so it’s really up to the fans to keep the bands around.

Natural Causes is out now on Napalm Records.  Here’s where you’ll be able to catch them starting next month with All That Remains, Devour the Day and Sons of Texas. 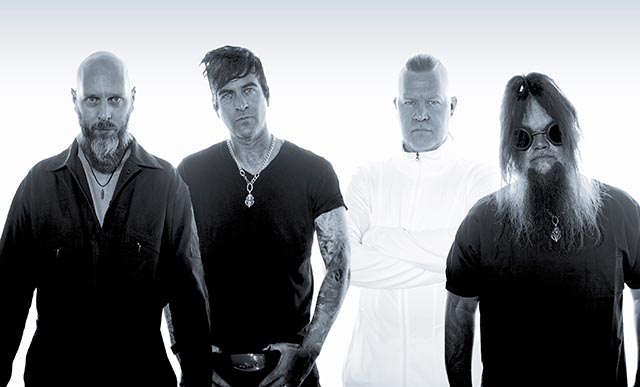