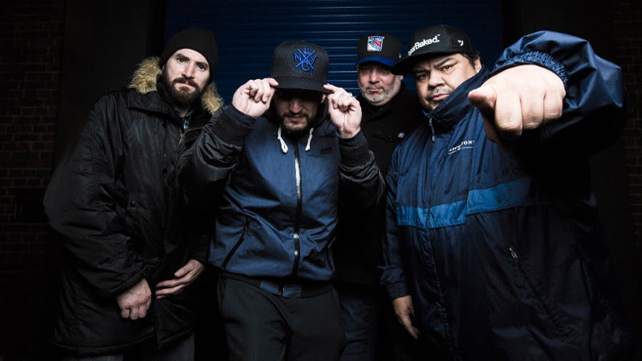 Maybe it really is something in the water that makes New York pizza better and its Hardcore bands just a bit harder than other scenes. Madball have been at the forefront of this legendary scene since they burst onto it in the early 90’s. Originally conceived as an Agnostic Front side project for AF vocalist Roger Miret’s 12 year old half brother Freddy Cricien, they eventually established their own line-up and hit the ground running with their full length debut “Set it Off” in 94. The band is currently preparing to release their 9th studio album “For the Cause”(on Nuclear Blast) which is being produced by Rancid’s Tim Armstrong. The guitars are being tracked by “Set it Off”era guitarist Matt Henderson as they have yet to name a permanent replacement for Brian “Mitts” Daniels who exited the group last October. I recently caught up with frontman Freddy Cricien before performing at the Stanhope House in New Jersey to get a detailed album update and more. You can listen to the entire conversation here.

First off the new record For the Cause do we have a release date yet?

I want to say, if I’m not mistaken June. Definitely June is the right month. Anywhere between the 15th and the 20th. I’ve seen somewhere June 15th. I don’t know how that coincides with America cause that was a European schedule, could be earlier here could be a couple days later, it could be at the same time. . . Let’s just say June 15th for sake of argument.

I think I can wait that long. So everything’s mixed, mastered, finished?

Ice-T laid down his guest spot? How did that come out?

Oh yeah. Really cool man. It was one of our faster songs on the record and for lack of a better way to explain it one of our thrasher songs on the record. I mean it’s Madball, we “Madballize” everything we get a hold of but it was one of our faster songs and I had laid down most of the vocals, I did two versions one with just me and then one where I left certain parts empty because I had him in mind for it. It’s great, it’s exactly what the song needed.

My favorite record of last year was the Bloodlust record (by Ice-T’s Body Count). Did you get a chance to listen to that whole thing?

I heard they used some guest writers on that like Billy from Biohazard, Doc Coyle (God Forbid / Bad Wolves) said he wrote for the song “This is Why We Ride”, Is Madball opposed to using outside writers? Were you ever sent tracks by somebody saying “Hey I think this would be perfect for you guys”? Or do you like to keep everything in house?

We like to keep it in house I’ll be completely honest with you. Not that I would be opposed to it really but we’ve never been sent a song. We’ve had people work with us that have offered suggestions about one thing or another but no one’s ever written for us or anything like that. But I don’t knock it, I think Ice-T is a perfect example, he’s got a lot going on in his life. He’s like let me get these cats that are in the mix doing their thing and I don’t knock him for that I think it was a smart move on his part. For us with the music and vocally speaking it’s pretty much in house, I don’t really see us calling writers but then again you never know.

Yeah. See I think for a new band it doesn’t make sense, but for a band that is well established, to freshen things up. You’re still performing it the way you want it, still tweaking it, there’s nothing wrong with being inspired or asking for help.

No. Nothing wrong with it at all. Agnostic Front is a good example they had people contribute to their last record that I was involved with as well. There’s no ego or any kind of shame, it’s like hey if you’ve got something good to offer and it makes sense we’ll try it out. But with Madball I think we’re getting the hang of it so, we’re students of music, we’re students of the game, we enjoy the growing process and it’s a challenge for us so we want to continue to challenge ourselves.

Is there anything on this record that is uncharacteristic of Madball? Because I feel like you guys are flying the flag for New York Hardcore and that sound and what that represents so does that make you less willing to take chances or experiment? As Jamey Jasta always says “You don’t want to fuck with the original recipe too much”.

And he makes a good point, when you’re known for a certain style or sound there’s a lot of truth to that. Which kinda can suck sometimes, you’re sorta pigeonholed like I can’t go too far this way or that way cause you’re trying too hard or you’re bumming people out too hard. But there also comes a point where you have to evolve somewhat and go with your gut. Like this last record for us, this is the record we wanted to write. Obviously keeping people in mind because the people that buy our records and have been supporting our band for however long it’s important they are pleased with the end result, but we also have to keep the creativity in mind. I don’t want to deliver the same album time and time again, we have to do something a little different, add a different spice without messing with the original recipe too hard. This record is by far the most diverse Madball record you’re gonna hear to date. I guarantee you that! If somebody says otherwise they’re not listening to the same record. Our hope is that you’ll be pleasantly surprised. We are most certainly excited about it, with the tones, the songs, across the board. But that’s just one part of it we’ll see if everyone else gets it but I think they will. I think if you’ve been riding with us you’ll get it. There’s gonna be people that might not fully get it and there’s gonna be people that this might be their favorite Madball record because they don’t really care about Set it Off. Their barometer. . . their time is right now!

Do you think that’s your most popular record Set if Off? Is it your best selling?

Maybe. I’ll be honest with you I haven’t checked, I don’t even know. That’s kinda bad right?

Not really, that keeps it pure.

No but I also represent the business aspect of the band so it’s pretty bad that I don’t know what those records have sold. I would venture to say it’s up there. Set it Off and Demonstrating My Style are some of the higher selling records but then again I don’t know because some of the later records did alright but it was a different time in the 90’s more physical records were selling so it’s hard to compare. . . but it’s underground music at the end of the day I don’t make a living off how many records I sell. Obviously you want to sell records and you want your music to hit as many areas as possible and touch as many people as possible.

Are you still doing the Hip-Hop thing?

I am (laughs) I guess I don’t know. I’ll tell you what I’ve always been a hip hop kid my whole life.

I would love to hear you do a Powerflo type band like with Billy from Biohazard and Sen Dog (Cypress Hill)?

Oh yeah, you think? I always tried to stay away from doing too much hybrid type stuff, not that I have anything against it.

Maybe as just like a side project, I feel like there’s a void for that stuff now. I mean we got just bombarded with it in the early 2000’s and then there was this backlash i think.

Maybe that’s why I kinda stayed away from it (laughs). I always liked heavy music obviously I’ve been in the hardcore scene since I was a little kid but I’ve always been a hip hop kid. But I always had a weird thing about mixing the two TOO much.

What about E-Town Concrete man?

They did it tastefully you know. They had a tasteful way of pulling it off. And when you can do that, that’s great but not everyone can do that. But as far as my hip hop thing goes I’m actually sitting on a few songs that I’ve had over the years and then I have beats that I gotta go through. I do plan on putting out another hip hop release at some point and it would be more diverse than the first one. It’ll be better I think because I’m a little more experienced in that world.

I forgot to ask you on the new record is there a song in Spanish?

Is that a thing now you do every record and are those songs bigger in the Latin American countries?

Yeah. We have a following in those countries and that’s part of our heritage so it makes sense. We’ve kept that in mind and we’ve done that the last bunch of records it’s sort of become a tradition for us to do that. It’s kinda weird to NOT do it now.

I’ve been trying to learn Spanish for like 15 years. Now I got a kid so I’m more motivated, I wanna teach him, he’s 2 but when he gets a little older and starts talking and learning I thought that’d be a good thing to learn together and I think the Madball songs could help me.

There you go, but don’t try and learn Spanish from ME! (Laughs) I’m not great at Spanish or English. I’m American by birth and a lot of times American kids with Latin or Hispanic heritage typically end up messing up the language kind of. And I’ve gotten a lot of compliments from fluent Spanish speaking people that I speak pretty decent Spanish. I got a pretty good grasp of it but with that said when I’m writing it there’s a lot of mistakes going on. Even with my English! But all things considered I speak it pretty well or so I’ve heard.