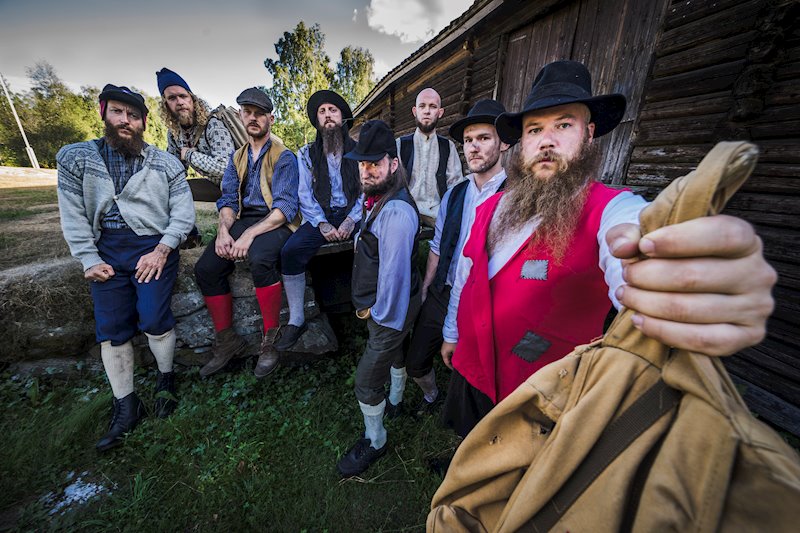 On January 18th, Trollfest’s new album Norwegian Fairytales was released via NoiseArt Records (order here). The Norwegian folk metallers used fewer instruments on their overall eighth full-length effort. However, the record includes a few special guests including Borknagar/ex-Dimmu Borgir frontman, ICS Vortex. Norwegian Fairtytales is nothing like 2017’s Helluva as the group created a concept album based on Norwegian myths and legends as each track share a story of an ancient Norwegian tale. We caught up with frontman Trollmannen (Jostein Austvik) himself to discuss the LP, and everything Norwegian including pine needles from Norwegian forests.

When did you start working on the new album?

It doesn’t seem like you guys stop writing as you went from Helluva straight to Norwegian Fairytales. I saw you created this album with fewer instruments aside from that, how was the writing process compared to the prior LP?

It was quite interesting, actually. We gave ourselves a little more time-wise, this time around. On Helluva, we didn’t have any deadlines or anything like that so we were working slowly and steadily until it was done. With Norwegian Fairytales, we set a couple of dates and said we have to have it done by this time. It was a bit of a new experience to be working under that kind of pressure but, on the other hand, it was quite interesting. Things can become slightly more focused when you do it that way because you don’t have time to dibble dabble and fiddle about, you have to get to the point and get shit done as soon as you can. This is for you to move on to the next thing that you have to do before the deadline hits you over the head.

No time for procrastination.

Can you talk more about the guest musicians on this album?

We had our live drummer, for the time being, his mom plays our Hardanger fiddle. She’s also a professional musician who played in the Philharmonic here in Norway but, she also plays the Hardanger fiddle, which is like a Norwegian folk version of the violin. She contributed to quite a few songs. Our previous guitar player’s singer did some of the singing on one of the songs and our original drummer’s kids did some laughing on the track. I guess, where you want to get down to is we also had I.C.S. Vortex of Borknagar and former Dimmu Borgir fame, he sang on one of the tracks.

How did you get him to contribute on the album?

Our Live drummer (Bjørn Dugstad Rønnow) is now the new drummer of Borknagar, but he also used to live with the guy who was in Borknagar before him. He knew Vortex and partied with him a couple of times. It turns out that Vortex wasn’t opposed to the idea of contributing so we asked him, he did it, and it turned out quite fine.

You guys continue to amaze me by how you consistently reinvent the wheel with creativity and imagination that goes along with each record. How do you guys come up with so many different ideas from each one?

Well, thank you, I should say first. For us, the other alternative is a bit boring. If you keep doing the same thing over and over and over again, it can easily get mundane and more of a chore than a pleasure. Whereas you change things around, you maintain a lot of the freshness. That’s part of why we do it. Creative inspiration can come from pretty much anywhere in my experience. Sometimes you’ll hear someone say something funny or say something in a funny way and that sparks an idea. Other times, you’ll see something on TV and find it very interesting so that sort of becomes your inspiration for a little while.

All of us in the band listen to as much music and different music as we possibly can. We’ll listen to anything from technical death metal to black metal with Mongolian throat singing and Bulgarian folk music towards Beethoven and Brahms. We’re very… 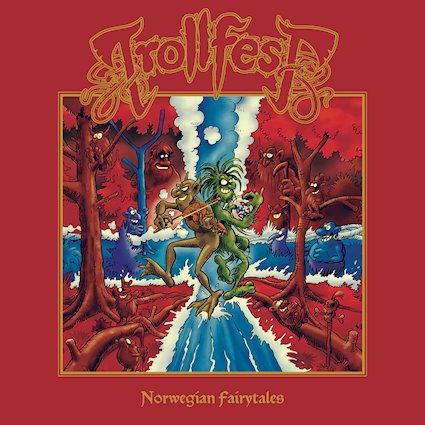 I completely agree with you. It’s been four years since we saw you guys tour across the United States, aside from the time you went to 70000tons of metal in 2017, will Norwegian Fairytales bring you back across the pond?

We’re very much hoping so. Nothing is concrete, signed, arranged, or anything like that but, we are hoping to and crossing our fingers, and being able to come to the states this fall. We would love to come back to the states. The tours we’ve done in the states were by far my favorite, I think.

For fun, if you could collaborate with an artist dead or alive, who would it be and what song would you cover?

That’s a very hard question to narrow it down to just one.

The first person that comes to mind.

It would be really cool with Igor Stravinsky, the Russian composer, that would be fun to jam with him. But on the other hand, it would be a fucking story and a half to jam with Elvis Presley as well. I have no idea, all of them.

One big musical party of the dead.

Yeah and we can cover Beethoven’s Ninth Symphony, give us something to do.

That would be awesome. A Hologram of Elvis with you guys doing Beethoven’s Ninth symphony together. With technology these days, you guys can probably pull it off.

What plans do you guys have for this year that you can reveal to us?

We’re also doing a European tour in February with Korpiklaani and Turisas. We’re very much looking forward to that as well. We have a few plans that aren’t confirmed yet. We’re going to drink some of our new beer that we brewed with the new album.

Can you talk more about the beer?

As the theme of the album is Norwegian Fairytales, Norwegian folklore, we made beer on 100% Norwegian ingredients. We used an old school Norwegian yeast, it wasn’t proper yeast but it was something yeast instead of yeast, I think. We put a lot of flavors from the Norwegian forest in it, so it has a bit of a citrusy fruity taste with hints of berries, it has the trees with the pine needles, maybe it’s pine. One of the trees that you find in the woods here in Norway, we put some branches from that in it to get a fresh flavor so to speak. I haven’t tried it yet. I’m trying it for the first time tomorrow. I’m very excited.

This wouldn’t be available in the states, I’m assuming.

Probably not to begin with because basically, it turns out that brewing, bottling, and boxing are a lot more expensive than brewing it and putting it on cans for on tap. In the first instance, it’s only for tap, so I don’t know. If there were some hardcore people in the states that wanted to order the tiny barrels, I’m sure they’ll be able to devise something but I’m convinced it will cost a leg and a half.

This is a great excuse for people to travel out to Norway.

It might be cheaper to travel to Norway to buy it.

What food do you think would pair well with the beer?

Sheep’s head, boiled sheep’s head would go very nice with it, also any kind of Norwegian dish would do, I suppose. Lobster bowl, or maybe Lobscouse, a cooked chopper.

Buy, our album? Buy our album and nag your promoters to book Trollfest so we can come back to the states and drink with you guys again! 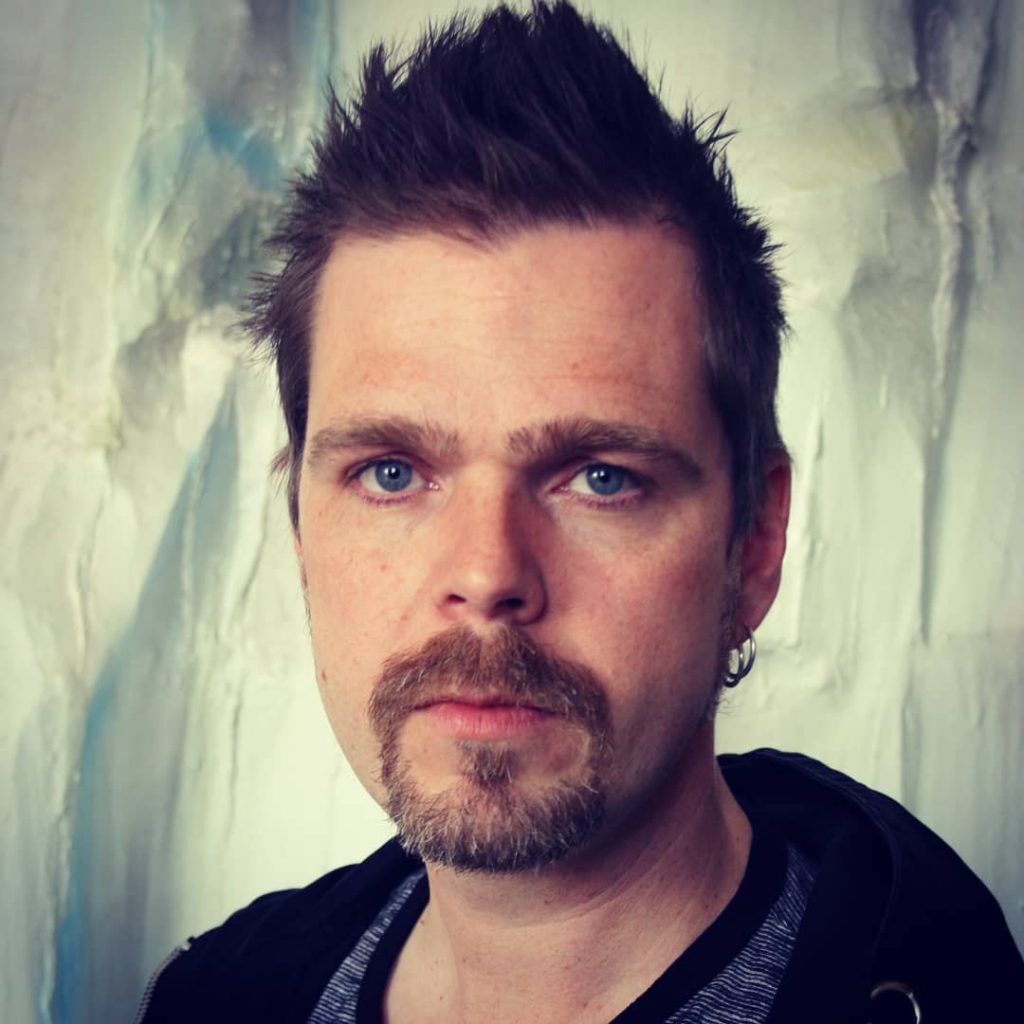