Sweden‘s Tribulation have been quite the busy bunch and haven‘t been picky when it comes to taking on full-fledged tours. Although it seems like yesterday that the band came here with Abbath on the lauded Decibel tour, the band is now a veritable headliner and will be hosting two lucky bands this time around. Tribulation play very cerebral black metal that can take the listener in myriad directions. They somehow work with every band they’ve toured with, as disparate as the musical genres and sounds may seem. Metal Insider caught up with drummer Jonathan Hultén to get the 411 on all of the important tour details you’ve been dying to know but nobody asked yet. You heard it here first at Metal Insider.

Your most recent album – The Children of the Night – came out over a year ago. Did you notice the band picking up steam and the massive groundswell before you arrived here?

Well, we actually went to the US two times before the album came out, but of course since it got released and got good reviews, the speed of the whole thing certainly picked up! Touring constantly also helped.

Tribulation’s sound has changed dramatically with each successive release. Was that your intent or have you now found your niche?

We don’t sit down to write in a certain style. What we do reflects who we are at a point or period of time when our music gets written and recorded. It’s always hard to predict what’s going to come next.

You toured with Deafheaven. How did that work out for Tribulation?

Every tour has its benefits and disadvantages, but I’d say the tour with Deafheaven worked out amazingly well. They’re the best people and everyone in the band and crew was really cool to hang out with. We’re about the same age and have a lot of mutual interests so it makes it easy to connect. Plus they’re a great band with a whole new crowd for us.

How many songs are written for your follow-up? Producer picked yet?

None and no. We have some sketches and ideas, but nothing decided.

Any unreleased takes from COTN that will be available soon?

No, we normally don’t record anything we don’t intend to release for the album.

Are the core members now going to the the same on the next record (Johannes Andersson, Adam Zaars, Jonathan Hultén. Jakob Ljungberg) or will you add some extra musicians?

You never know. Taking in another instrumentalist as a steady member seems highly unlikely as of right now, but I have a feeling we’ll have some more people than ourselves will be playing some of the extra stuff that we normally do.

Are you going to bring any special stage production on this headlining tour? Confirmed support acts?

We haven’t really talked about it yet, but we’ll do the show as grand as we can, as always! We asked Horrendous and Youth Code to join us on the road and they both agreed, we’re very happy with that! Cauldron will be filling in for Youth Code on the Canadian dates, that’s going to be a blast too!

Does the country of Sweden support the arts and provide monetary assistance to tour?

Not really. There are ways you can get money for some music and arts related stuff, but they don’t exactly pay your bills when you’re on tour.

How has our country treated you across the states?

The US has been great! We love playing there and there are always cool people coming to the shows!

Any endorsements for amplification, drums and guitars yet?

We use Lace pickups, but other than that, we’re not endorsed by anyone yet.

Do you get fans of The Horror (2009) that don’t understand the updated sound or vice-versa?

Certainly. And I completely understand that, I don’t like certain periods of certain bands. Why should we be any different? All you can hope for is that people give it a listen and judge the music for what it is and not for what it used to be. 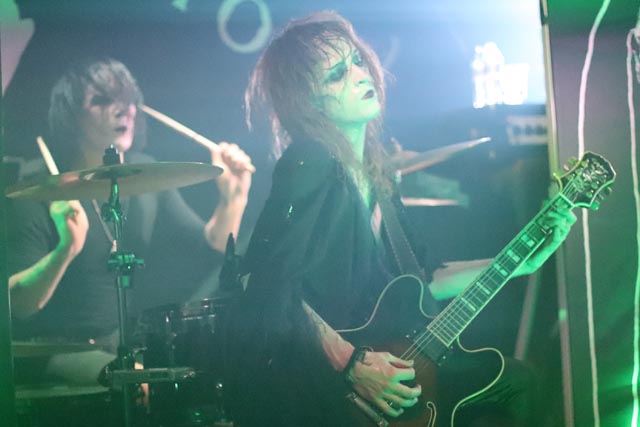