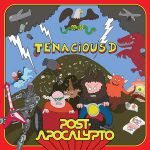 Post-Apocalypto is the purest thing ever released by Tenacious D. There were no network execs, no movie studios – just Jack Black, Kyle Gass, and producer/bassist John Spiker (along with guitarist John Konesky). Since these songs were written for the purposely undercooked accompanying web-series of the same name, many clock in under two minutes, which as a formula, seems to work very well for The D. “Making Love,” I would argue, is the best Tenacious D song ever. I’ll close with the following plea to the greatest band in the world: Jack and Kyle. Please don’t make us wait another six years. You still have so much rocketsauce, in fact, you’re both writing and singing better than ever. Please don’t ever stop being Tenacious D.

Listen to Josh’s highlights in the playlist below: