Devastation on the Nation tour with Rotting Christ, Borknagar, Wolfheart, Abigail Williams and Imperial Triumphant, has officially been postponed. The tour is rescheduled to February 11th-March 14th, 2021 with the same route.

Read the official statement below:

“Official Statement from Metal Festival Tours and Continental Touring in regards to Devastation On The Nation Tour:

Due to the COVID-19 pandemic, there are numerous states and cities on the Devastation On The Nation Tour that are putting bans on gatherings anywhere between 100-1000 people. On top of that, the President of the United States of America has put a travel ban in place for anyone coming from Europe to America for the next 30 days which starts Friday. Three out of the five bands on this tour are from Europe which are Rotting Christ, Borknagar, and Wolfheart. They were scheduled to fly here on March 18th. Unfortunately, as you can see, our hands are tied and we have no other choice than to postpone the Devastation On The Nation Tour.

The tour will now be rescheduled to February 11th – March 14th, 2021 and will have the same route in place. The tour will still feature Rotting Christ, Borknagar, Wolfheart, Abigail Williams, and IMPERIAL TRIUMPHANT

To everyone who has purchased tickets already. If you would like a refund, you are able to get one by contacting the company you purchased it from. If you would like to hold onto your current ticket, it will be honored at the rescheduled date. We hope many of you will keep your tickets and join us in February/March of 2021.

Please stay tuned for our next announcement which will come very soon.” 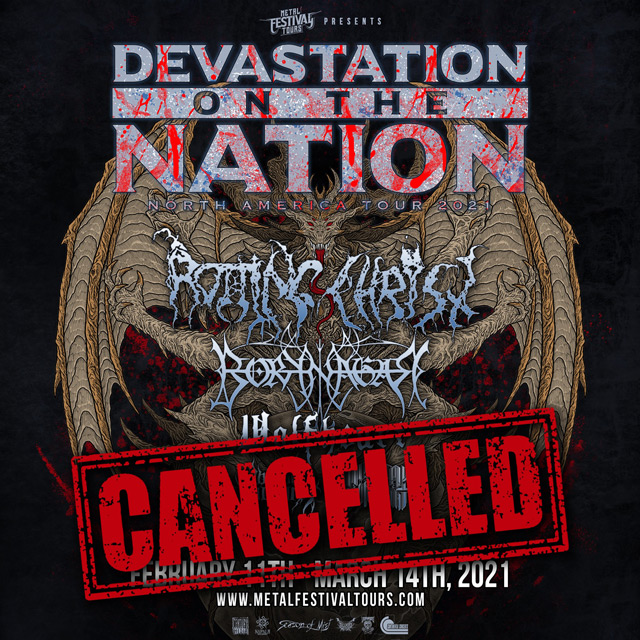