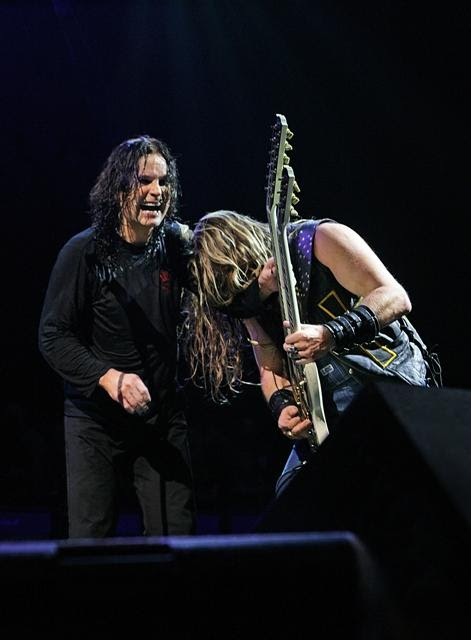 One name noticeably absent from the list of musicians is Zakk Wylde. The guitarist has been a frequent collaborator of Osbourne, featuring on several of his albums and tours.

In a new interview with Kerrang!, Osbourne sheds some light on the omission, saying that even he didn’t know he was making an album. Writes Nick Ruskell:

“It wasn’t until their days jamming “to see what we came up with  had borne enough fruit to make a record that it clicked that they’d made one. So fast did things happen, in fact, that the idea of Zakk Wylde joining on guitar – a man for whom Ozzy declares a huge amount of love when his name is mentioned – didn’t come up, because, “we didn’t know we were making an album”

According to the interview, the album came together quickly and organically. Said Osbourne:

“We’d bounce the fucking melodies around until something came up, and we’d just go with it. It was fun. And it was so fucking good to be doing something. Because I’d be lying in bed going, ‘That’s it, I’m never gonna walk again,’ and this got me doing something and feeling good. And it was simple, it felt more like recording a fucking jam session. It’s not like a Pink Floyd thing where you’ve got to take a tab of acid to enjoy it – just crank the fucking thing. Go for it!”

Ordinary Man came as a lifesaver for Osbourne, who had a rough go of it this past year. The Prince of Darkness had been laid up after a fall at home aggravated a 2003 back injury, followed by a bout of pneumonia and a Parkinson’s diagnosis.

“There’s so much joy in it. And it picked me up out of my blues, definitely. We’ve captured the essence of fun. And it felt good to achieve something. It’s like swimming from one side of the world to the other and you go: ‘There’s land!’ It made me think, ‘I’m not fucking done yet!’”

“It’s like nothing I’ve ever done before. I hope people like it, but that’s the icing on the cake. How the fuck do you even get in the charts these days?! I was just so glad to be doing something. I wouldn’t be sitting here now talking to you if I hadn’t made it – it lifted me out of my misery.”

The sessions were so important to him that he and a few of his collaborators got matching tattoos to celebrate the bond they had. Writes Ruskell:

“There’s something else, too. This episode of Ozzy’s life reminded him of what good mates he’s got. When asked to be involved, nobody – Duff McKagan, Chad Smith, Slash, Post Malone – needed asking twice. Of course you want to jam with Ozzy, not for the glory, but because he’s Ozzy: The Man; Ozzy: The Lovely, Warm-Hearted, Kind Bloke. Showing us his hand, he reveals the bat tattoo that he got after recording. Andrew, Chad and Kelly all have them as well, a mark of the importance of friendship during the most trying of times (“It’s very Ozzy, innit?” he beams).”

The promotion for the album seems to find Osbourne in a pretty jovial mood as well. The singer is the guest of honor in Faze Clan’s latest YouTube video, which finds the troupe dropping by Osbourne’s home to play the “What’s In The Box?” challenge. Osbourne is up first, contending with lizards and hedgehogs before leaving the real horrifying fare to the the Faze Clan boys, his son Jack and wife Sharon. Watching Ozzy laugh and fool around with the YouTubers, you can tell that he’s relaxed and having fun. Despite making the decision earlier this week to postpone his North American tour dates to seek treatment for his Parkinson’s in Switzerland in April, Osbourne is still, for now, going forward with the European leg of the ‘No More Tours II’ tour. Those dates start October 23 in Newcastle, UK and wrap up December 7 in Helsinki, Finland.