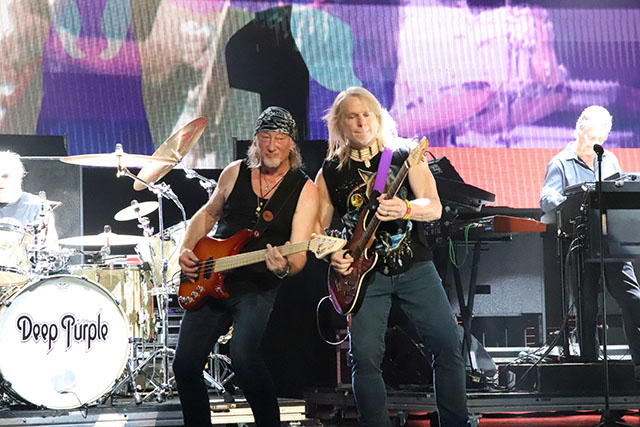 Ian Gillan is the man whose voice just does not seem to age. Going on stage after Judas Priest is no easy task, yet Gillan and Deep Purple brought the house down in Holmdel this past Thursday night and had everybody, including security, rockin’ to “Space Truckin’,” “Highway Star,” and “Perfect Strangers.”

Clearly NOT perfect strangers with the audience, Deep Purple, (additionally comprised of drummer Ian Paice, bassist Roger Glover, guitarist Steve Morse and the legendary Don Airey on the keys) played to a capacity crowd and took them all on a magnificent journey of the band’s very best.

It’s clear to see just how masterful Deep Purple is at their craft. With Paice and Glover (who seemed to be happily smiling from start to finish) laying down the rhythm expertly, Airey and Morse are able to dazzle the crowd with fantastic leads. Gillan, who never misses a note, expertly delivers on bluesy numbers like “Pictures of Home,” “Knocking at Your Back Door,” and “Strange Kind of Woman.”

In sharp contrast to Judas Priest’s more elaborate stage, Purple take a more utilitarian approach to stagecraft, but, in a nod to their late 1960’s origins, wow the crowd with a modern-day rear projection system that blends visual elements of the psychedelic with post-millennial clarity. Undoubtedly, however, the band recognizes that THEY are the show and thus rely most strongly on audience interaction and showmanship above all else.

It’s difficult to point out highlights in a 1 hour, 15 minute set of some of rock’s greatest songs ever recorded, but certainly “Smoke on the Water” with Morse’s interpretation of that famous riff got everyone in the audience rocking and singing. “Bloodsucker” was another track that really got the floor shaking.

Deep Purple continues to tour with Judas Priest through the United States for the remainder of the month. They then head off to Japan and Mexico later in the year. Tour dates and tickets, including VIP experiences can be found here.

This is a tour you absolutely do not want to miss, and if you’re like the myriad of middle aged fans like myself, do your children a favor and take them to witness an important piece of music history, as I saw so many parents do.  There will be never be another Deep Purple. 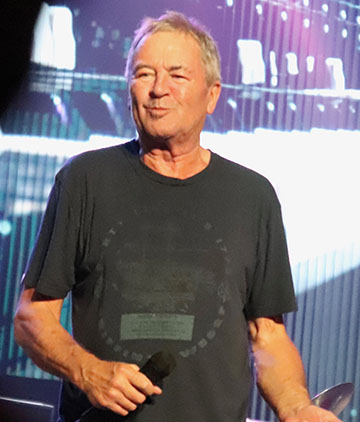