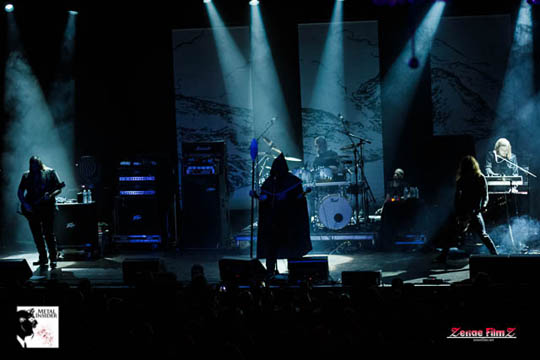 The line moved a lot smoother to walk inside the Fillmore on day 2 of Decibel Metal & Beer Fest. This time around, we had plenty of time to taste a beer or two to help cure the hangover before Outer Heaven’s set.   – Zenae Zukowski

There was a lot of buzz about this band leading into the venue. It could be that these death metal newcomers hail from Douglasville, PA – not too far a trek from Philly. It could also be that they’re just incredibly good.

The band played a bunch of songs off their debut full-length record, Realms of Eternal Decay, which was released in October 2018 via Relapse Records, and demonstrated a ton of sheer heaviness and luscious groove. – Jeff Podoshen 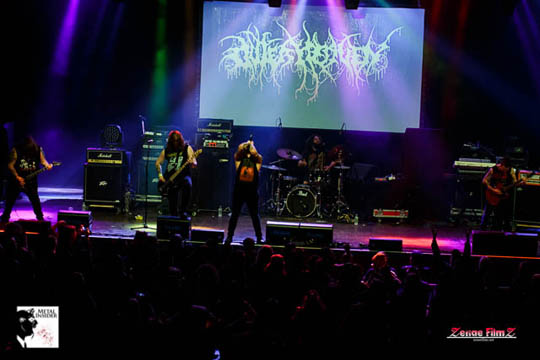 Philadelphia’s Heavy Temple easily won over the crowd with an extremely tight, psychedelic-inspired performance of, well, heavy rock. High Priestess Nighthawk commanded the stage with her impeccable bass work and enchanting vocals. A three-piece with a nostalgic, yet uniquely current sound, the band played in front some great visuals that brought concertgoers, momentarily to a different plane of existence.    – Jeff Podoshen 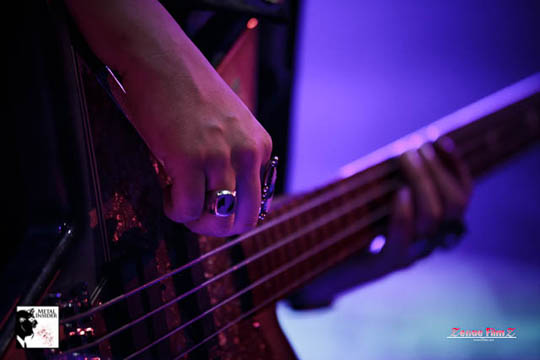 Concertgoers were curious to hear Philadelphia’s Rosetta. The group’s overall sound equates to Explosions in the Sky meets At the Drive-In and shakes hands with Neurosis. Difficult to follow and hard to understand, the band’s independent style ended up surprising the audience as many were mesmerized by their set. While frontman Mike Armine’s sunglasses set a few people off, their performance was the perfect way to close the first half of the night. – Zenae Zukowski

Deceased, a Decibel Rock N Roll Hall of Famer, showed the crowd with a fierce performance on the second night. The larger-than-life King Fowley, whipped up the audience with unabashed, sheerly pure death metal. Guitarists Shane Fuegel and Matt Ibach were relentless as the band kept the circle pit going at breakneck pace. An intense cardio workout for those on the floor. Of course, the older folks, had a great time in the balcony as well.

Playing all the classics like “The Premonition,” “The Mausoleum,” and “Fading Survival,” Deceased proved to the Philly audience that, as a band, they are very much alive and kicking.

Kingsley Fowley led the set as he reminded all the band has been there since the eighties and aren’t stopping anytime soon. At one point Fowley mentioned the loss of their drummer, David Castillo, who died last year from drowning. The band were forced to postpone two shows in support of their new album, Ghostly White, which was released sometime last year. Therefore, this particular performance was vital for me to watch and they gave the perfect balance between thrash and death. – Zenae Zukowski

If you’re a loyal reader of Metal Insider (we love you!) you know how much we respect and enjoy Enslaved. Hailing from Bergen, Norway, Enslaved gave American fans an especially rare performance of their 1994 Frost record. This was indeed a treat.

Wearing beautifully designed costumes created by Kim Dylla, Enslaved mesmerized the audience with a 6 foot tall spear and an atmosphere that took us back to the days of Vikings.

Enshrined in Decibel’s Hall of Fame, Frost, is one of the seminal black metal releases to come out of Norway in 1994. The record features song of the fastest songs ever recorded by the band, and the current lineup, in true Enslaved style, performed them flawlessly.

I’ve been to a number of Enslaved shows, and this one was by far the best I’ve seen them. Despite the band always finding a way to make lighting more challenging (for photographers), they gave Frost a literal vision as the fog and blue lights made the entire atmosphere “Frosty.” I enjoyed every moment of their set and despite being seen as a silhouette, guitarist Arve Isdal  still managed to shine.

I’ve grown accustomed to their setlists, which is mostly from their newer-progressive material and leaving a few songs to the second half of their set (depending on the show) with their older black metal music. Therefore, seeing Frost in full, was an experience. The only “complaint” I have is, they should have performed after Deafheaven. Stylistically, Deafheaven would have been great to go after Rosetta. Regardless, well done Enslaved. When’s the next show? 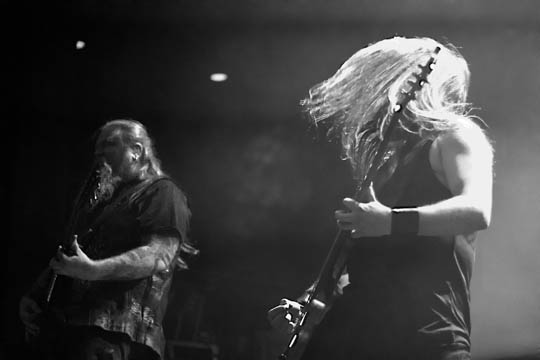 This was my personal first time seeing Deafheaven since their performance at 2015’s Heavy Montreal. A lot has changed with the group as they’ve literally blew up sometime between 2015’s New Bermuda to 2018’s Ordinary Corrupt Human Love. While four years ago I said they were Cradle of Filth meets bands similar to Krallice, that opinion is somewhat relevant today. However, different. They’ve come a long way since and has executed a unique style of their own. Their attire seemed a bit uniformed but, don’t let that set you off from their performance. George Clarke led the stage with brutality as the band allured the audience with a killer set of songs including “Brought to the Water,” “Black Brick,” “Come Back,” “Honeycomb,” and “Dream House.” 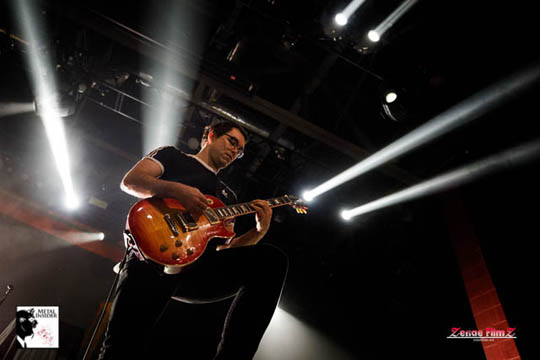 I was speaking with Triptykon backstage before their performance and they were telling me how they just flew in from Europe and might be experiencing jet lag. Jet lag? Try NO lag – as there was absolutely nothing lagging about this performance.

The band entered the stage as folks in the front row were literally crying at the emotion of experiencing these Swiss legends in the flesh. And the Philly crowd never let up with constant chants of Tom G Warrior’s signature “ugh!” And “oogh!” in between songs. Tom (with his distinct H.R. Giger guitar in tow) and the band was so receptive to the welcome he and the band received in the City of Brotherly Love.

Tom and company opened with “Synagoga Satanae” and treated fans to both a mix of Celtic Frost and Triptykon songs including “Goetia,” “Procreation (of the Wicked),” and “Altar of Deceit.” The entire building went nuts when the band tore into “Circle of Tyrants,” and continued as they moved into “Tree of Suffocating Souls.”

The conclusion to both Triptykon’s set and the fest was the mesmerizing “The Prolonging,” which is an intense dirge off the band’s first release, Eparistera Daimones. With the brooding, melancholy, yet uplifting lyrics, “As you perish, I shall rise” it was so obvious just what these songs means to both the band and to the long-time fans in attendance.

Triptykon is a sight to behold. An extremely tight band, that currently features drummer extraordinaire Hannes Grossmann, who really crushes it.  While the humble Triptykon kept mentioning how honored they were to be at the Decibel fest, there is no doubt, that the feeling was mutual. For so many fans this was a once in a lifetime event, and for me, personally, I was so grateful to be able to experience it.   – Jeff Podoshen

100% agree with Jeff, it was a once in a lifetime event. Triptykon made it well worth missing Game of Thrones.

With the festival being a two day event, I think there should have been more bands added or string all fourteen in one full day. Part of me felt starting at four was too late, and another part thought it was just right. However, I did make it out to the aftershow to see Withered and I would suggest packaging the pre and aftershow tickets on as a “full festival” package. Aside from that, Decibel Metal & Beer fest is a unique experience.

Not only were we able to see some killer bands from Philly as well as Enslaved perform Frost in full, we also had the opportunity to taste beer from breweries all over the country. While I enjoyed Atlas (DC), Adroit Theory (VA), Ardent Craft Ales (VA), I have to say, the beer I drank the most was TRVE (CO). TRVE had the most delicious brew out of the bunch, and now I’m tempted to fly out to Colorado to have more.

Overall, we are looking forward to return next year as this is a festival well worth attending. – Zenae Zukowski 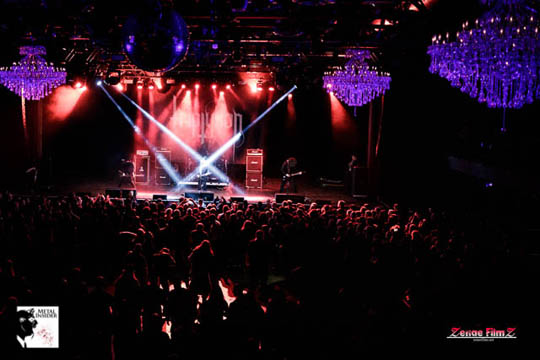 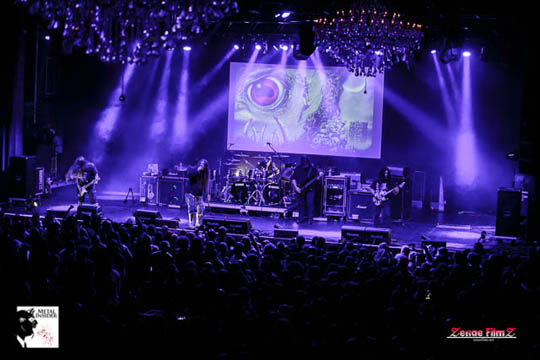 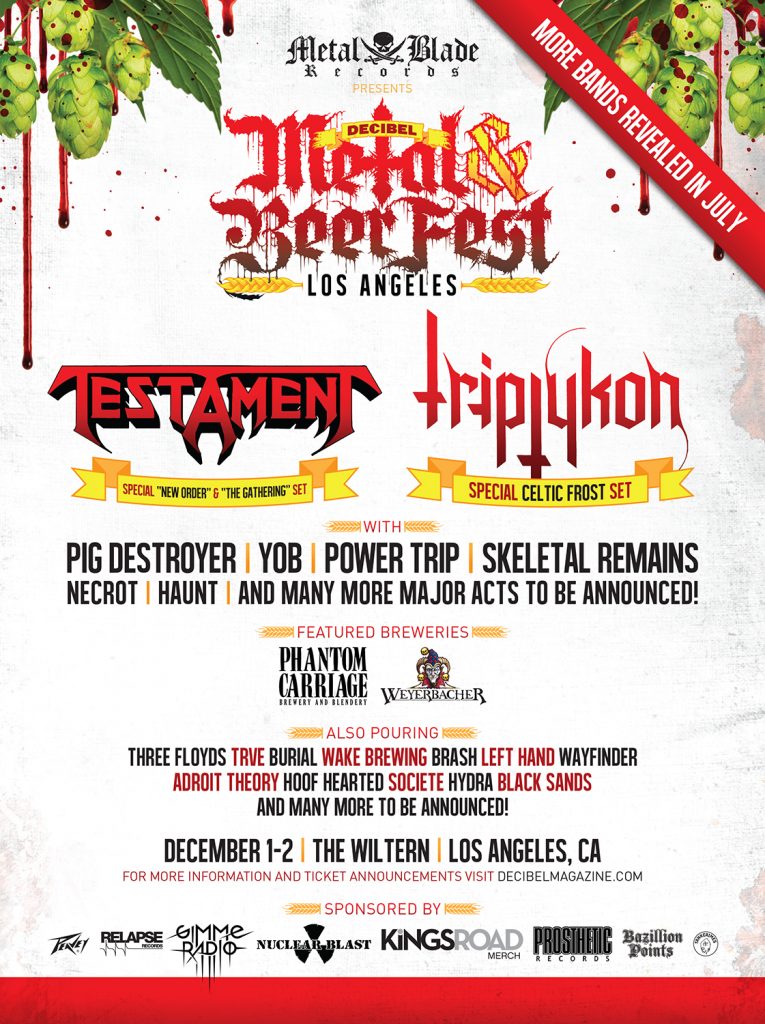