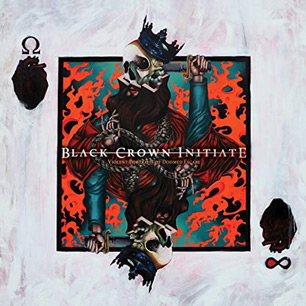 Ever since Black Crown Initiate dropped Selves We Cannot Forgive back in 2016, I was always curious how the band would proceed with their next effort. Unfortunately, it took four years to hear new music, but it was definitely worth the wait. Violent Portraits of Doomed Escape has exceeded my expectations and is an excellent representation of progressive death metal and what can be done within the genre. The musical avenues the band chose to explore were thrilling and artistic. From beginning to end, there is an encompassing flow that is seamless from track to track.

With every album, the band has been able to adjust and improve their sound, creating a tighter and well-versed collection. As this new record takes form, you’re able to hear how the band has matured musically and lyrically. Take the intro track, “Invitation,” for instance, and it’s opening lyrics delivered by guitarist Andy Thomas, “Fate Sealed, He Invites His Cancer In, It Bores A Hole, and He Fills It Up With Sin.” The meshing of the lyrics and the plucking of the acoustic guitar creates an uneasy feeling of not knowing what lies ahead. It’s as if you’re being forewarned before leaving on a journey. There’s a sense of uncertainty for the first minute until frontman, James Dorton, jumps in with his gut-wrenching screams, delivering a dark aura shaping the previous somber lyrics into a dark shroud of enmity.

The light and dark contrast that both vocalists create is prevalent on this record and undoubtedly makes this album exciting to listen to. The relay between sorrow, pain, and anger is what drives this album home. After hearing the title track of their sophomore record, “Selves We Cannot Forgive,” I did not think Andy could top that performance. However, after hearing the chorus for “Years in Frigid Light,” he might have proved me wrong. It’s incredible that Andy initially did not intend to become a vocalist for the band but only did so out of necessity. To have a voice so impressive and captivating, it’s crazy that he almost kept it hidden.

When discussing the album, James talked about how he got perma-headaches after recording “Holy Silence” and how he left a chunk of himself on this record. It is indeed evident when hearing his grueling screams, which are profound and fierce. As previously mentioned, his first appearance in “Invitation” hits so hard, and his delivery in “Death Comes in Reverse” is stimulating. Speaking of solid performances, joining the band on this record is guitarist Ethan McKenna, and he did a fantastic job. His solo during “Holy Silence” is top-notch and exemplifies a perfect balance of technical proficiency and melody. That high pinch-harmonic gets me every time.

Overall, Black Crown Initiate delivered an outstanding album that embodies a well-blended style of progressive death metal. It has that early Opeth-esque feel that we all love, mixed with a modern take of metal. Both Andy and James delivered excellent vocal performances and poured their heart out on their sleeves for this record. It’s safe to say Violent Portraits of Doomed Escape will surface on many top album lists for 2020.

Pick up your copy of Violent Portraits of Doomed Escape here!