Buckcherry make a return to the hard rock spotlight with their latest effort, Warpaint. Filled with a plethora of meaty headbangers and a few softer moments, the album attempts to take the band back to their mid-late 2000s glory days, for better and for worse.

With Warpaint, the band maintains their familiar sound while continuing to expand on their influences at the same time. Produced by Mike Plotnikoff, who also helmed the band’s 2005 breakthrough album 15, you can definitely hear elements of their early sound coming into play. Big guitars and hard-hitting drums surround frontman Josh Todd’s raspy vocals on just about every track. However, you can hear new elements and influences peaking their way through as well. The three-song arc of “The Alarm,” “No Regrets” and “The Hunger” bring in a sort of country-tinged sound to the band’s bluesy hard rock.

There are plenty of places where Warpaint shines. The album features some of the band’s most ambitious, hard rocking songs to date. “Warpaint” comes out swinging with its pounding drums and electricity-filled guitar melody, a fitting beginning that puts the entire album in perspective. Single “Bent” is an aggressive tune that pushes through with powerful guitar riffs and vocals that feel as out of control as the song’s lyrics. “No Regrets,” which has this rockabilly, barn-burner vibe that makes it an energetic burst of fun to kick off the back-end of the album, is one of the album’s stand-out tracks. It’s combination of hypnotizing guitars and break-neck drum beats create this spinning, “going off the rails,” feeling, making it feel like a wild party in one three-minute song. The album ends strong with “The Devils In The Details,” a politically-charged track with unique pacing and impassioned chanting that moves through like a steamroller.

The band doesn’t only excel with the hard rock tracks on the album, but with the ballads as well. “Radio Song” and “The Hunger” are two of the album’s strongest tracks. “Radio Song” is a sentimental power ballad wistfully yearning for the simpler times the songs on the radio remind him of. “The Hunger” is a sincere love song somewhat in the vein of “Sorry,” delving a bit into the realm of country-tinged rock to express his longing.

Unfortunately, the familiarity in their sound comes off a bit safe in some places. Songs like “Right Now,” “The Vacuum” and “Closer,” which are by no means bad, fall a bit flat in terms of memorability. Even their cover of Nine Inch Nails classic “Head Like A Hole” doesn’t quite meet expectations as the band pounds through the track too fast for it to come across with any passion.

Warpaint finds Buckcherry sticking to the hard rock they know best while continuing to explore the extent of their sound. From the aggressive hard rock tunes to the downtempo ballads, the band makes one of their most accessible, hard-rocking albums to date. Though the album may have its ups and downs, it will definitely have you rocking out the whole way through.

Buckcherry’s Warpaint will be released on March 8th via RED Music. Pre-order the album here. 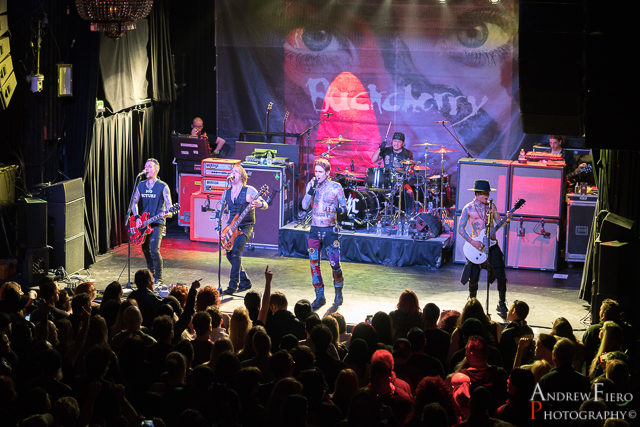