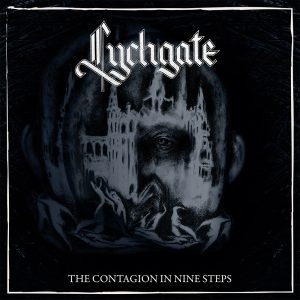 If you’re an avid fan of the bizarre and unorthodox approach of music as a form of creative expression, you may have noticed a growth in its presence within the metal community over the past few years. There’s simply an escalating demand for originality that doesn’t seem to be met the more bands start realizing that rules are meant to be broken, and the limitations are invisible. One of those entities who caught the extreme metal scene off guard with their doom extravaganza collection of tracks An Antidote For The Glass Pill in 2015 was UK’s extreme cult Lychgate. To continue with their splendid music journey, they are now presenting their third release  The Contagion in Nine Steps

Lychgate has encapsulated a psychological journey that will stop by every emotion experienced by the collective mind with each of their tracks. Taking a historical and philosophical approach, the album delves deep into the core of society as a sentient entity, exploring the concept of swarm behavior throughout Europe’s past.

The album starts in a similar note to its predecessor, with a grotesque and unnerving organ accompanied by an ad libitum percussion and a dissonant string work performed by bassist A.K. Webb. “Republic” prepares the mood for the rest of the album by creating a daunting atmosphere with undertones of stability which are resolved in its unique way throughout the end of the whole piece.

There are sprinkles of beauty among such a chaotic work, spread by the beautiful clean vocals and chanting which give a sense of security to continue indulging in the pragmatic composition. With this in mind, the consistent reminder that this is still, in fact, an extreme metal release are prevalent at every corner of each track. Esoteric’s Greg Chandler brings in his gurgling and asphyxiating vocals also into the mix, forging an amalgam that takes hold of the entire release in a dominating way, absorbing the instrumentation into his void.

For those looking for a seemingly more traditional heavy track, “Hither Comes The Swarm” serves well to those needing a break from the erratic. As the main topic of the album indicates, the track is the inspiration of the concept as a whole, which itself alludes to Stanislaw Lem​’s book The Invincible and the concept of societal evolution and behaviour. The technical and musical progress of the song moves with the same simplicity of any other doom track, just to end in a reflective passage performed by guest pianist Vladimir Antonov-Charsky, mirroring its same lyrical content.

The same way that the album is meant to explore different ideas presented by Plato’s, Hegel’s, Le Bon’s, and Canetti’s regarding civilization’s conduct, each song has their own personality, with each instrument uniquely playing in a counter-point manner which later conceives a concise, well-blended anthem that only make sense after several spins. The same way that An Antidote For The Glass Pill created a wave of praise within the metal scene, The Contagion in Nine Steps will stir those curious for a complex, ambitious release and will find its pedestal among those who get to understand it.

The Contagion in Nine Steps is out now via Blood Music but you can get a taste of its confusion below: