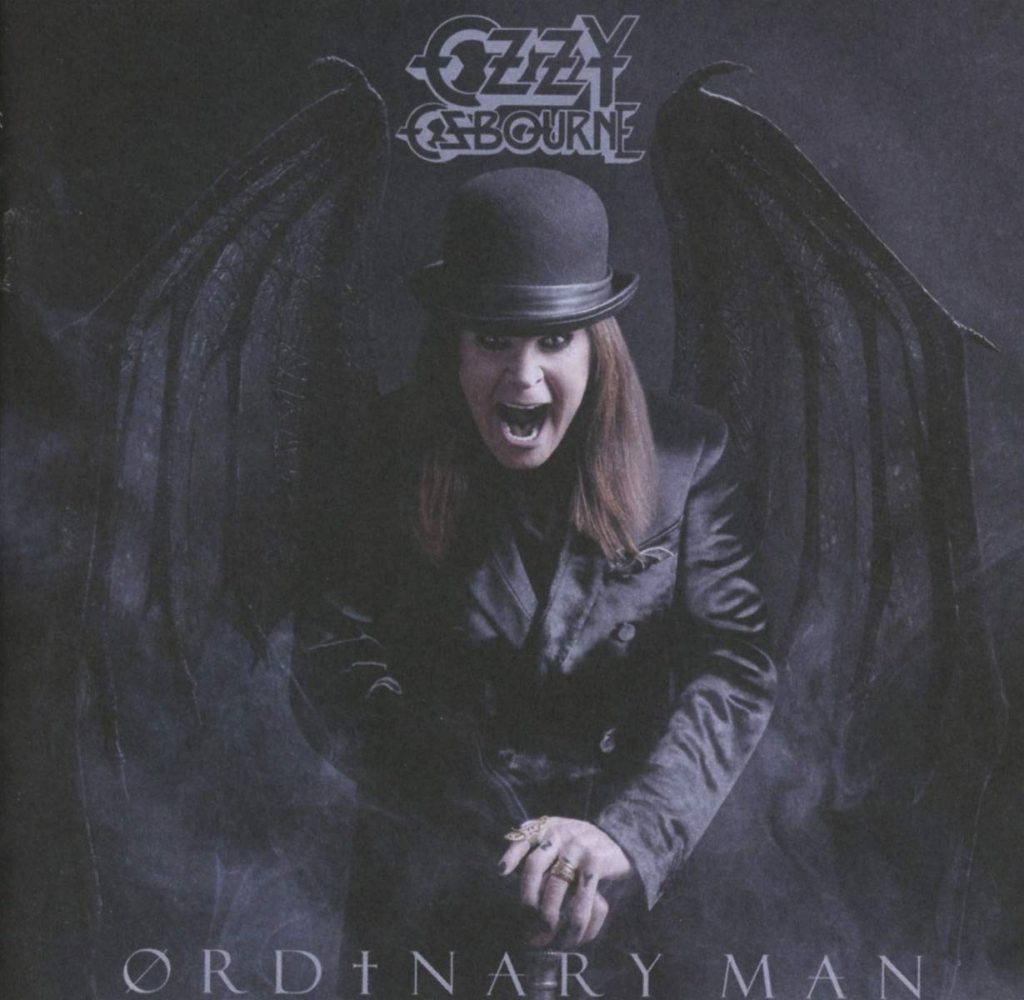 Ozzy Osbourne’s first solo album in a decade, Ordinary Man, has finally arrived on Friday (21st). Metal Insider contributors shared a few words on the follow-up to 2010’s Scream. After having multiple listens on the Prince of Darkness’ twelfth solo effort, makes us wonder if it’s time to change the overall ranking of his albums.

Matthew Brown: I just finished listening and I feel the same way I did about Ozzy’s last two solo albums: two or three solid hits, but the rest is just okay.

“Straight To Hell” is a straightforward but effective album opener and “Under The Graveyard” is still a catchy lead single. I really liked his collaboration with Elton John on the title track, not just from a musical perspective, but because of the similarities of their respective careers: rising to fame in the 70’s before reaching a low point at the end of the decade, a resurgence in the 80’s, substances abuse issues that could have killed them several times over, and now taking the time to look back at their lives. But the rest of the album is just serviceable. Not bad, mind you, just not enough to make me want to spin the whole album again rather than just the singles. I didn’t even mind Post Malone showing up for “It’s A Raid”, though the inclusion of “Take What You Want” as the album’s finale is a bit head-scratchy since it’s more of a Post Malone song featuring Ozzy. It’s not even an alternate version, it’s just the same song taken from Post Malone’s newest album. I’m sure I’ll come back to Ordinary Man just to see how it ages, but for now it’s just fine.

Album highlight: Ozzy asking “Is it tea time yet? Do they sell tea in heaven?” in a posh accent at the end of “Goodbye”. Just some good old fashioned silliness from the Prince of Darkness.

Jeff Podoshen: I can’t get through the new record. I don’t know or care who Post Malone is. Just give me my Diary of a Madman and Blizzard of Ozz records and leave me be.

Max Feldman: At least its not “Scream”

Bram Teitelman: Is this the best Ozzy album in 25 years? There’s an argument to be made for that, but that’s like saying that George W. Bush is the best Republican President in 25 years. Just because regrettably true speaks more about the filler than what’s going on with the actual album. Black Rain, Scream and Down to Earth are forgettable, and this, well, at least there’s some signs of life. Post Malone producer Andrew Watt, given the chance to work with his idol, has crafted an album that gives plenty of nods to Sabbath and Ozzy’s past career. “Alright now?” you can hear that in “Straight to Hell.” Want a “go fucking crazy?” that’s in “Raid,” the duet with Post Malone he does. Want a harmonica intro that may remind you of “The Wizard?” It’s on “Eat Me,” which is certainly the dumbest song on the album. There’s nothing particularly original about it, but switching up the personnel he’s had for the last few unremarkable albums allowed him to shake off some cobwebs.

The lyrics on Ordinary Man suggest that he’s looking at his twilight years, and if this isn’t his last studio album, it seems very much like an epilogue. From the “we all die alone” sentiment of first single “Under the Graveyard” to the “do they serve tea in heaven?” that ends “Goodbye,” it’s clear that he’s coming to terms that he’s not immortal, which was underlined by him canceling his touring plans for the foreseeable future. As far as the music “Under the Graveyard” is the best single he’s had in years. “Straight to Hell” is fun, if not super original, and the riffs on “Eat Me” and ‘It’s a Raid” are lively, even if the songs might not be stuck in your head long after you hear them. “Scary Little Green Men” is also fun once it kicks in.

At the end of the day, there’s a very short list of 71 year old rock stars that have put out memorable albums, and even if Ordinary Man doesn’t come close to Ozzy’s first decade of albums, it does more than hold its own alongside his work from the last two decades. Here’s hoping he stays healthy enough to play some of the songs from it on his own accord.

Zenae Zukowski: I may be the only one who thinks this, but I enjoyed Ordinary Man. I gave it quite a few spins while editing photos, and it can make one think about a lot of things. We are not here forever, and despite the health scares Ozzy has had over the years, he’s not immortal. Ozzy is one lucky mother fucker that managed to survive through an incredible amount of near-death experiences. Meanwhile, people die every day from either natural causes, cancer, horrific accidents, and more. Whether you’re a known musician such as the recent unfortunate passings of Reed Mullin, Neil Peart, Sean Reinert, etc.. or someone who was a close friend of the family, a pet, or just about anyone, death is unavoidable.

We are never guaranteed how long we are here for nor will we fully find the answer to the meaning of life, and this album is a reminder of our fragile mortality. The lyrics on some of these songs, including my favorite single, “Under the Graveyard,” will strike you. Is this one of Ozzy’s best-sounding records? No, of course not, and I went into this with expectations that it would be terrible. To be in your seventies and still have the capability to create music while having your fan base at one point fear you’re on your deathbed, you have to admit, this is remarkable.

Musically, I find the songs catchy and an easy listen. My favorite songs are “All My Life,” “Goodbye,” “Ordinary Man,” “Under the Graveyard,” “Scary Little Green Men,” and “It’s a Raid.” And yes, I was surprised that a track with Post Malone on it would be included as one of my favorite songs on the album. However, I didn’t like “Take What You Want” at all; it’s an instant skip. As rushed and polished parts were, this record is a way for all of us to reconnect with ourselves and realize we’re not here forever. We have days when our misery takes over, days when we reminisce on loved ones, and days when we wish we didn’t take life for granted. Before you judge this album saying, “This is no Blizzard of Ozz,” give it a few spins and really listen to it. I guarantee you will find something meaningful that you can relate with.

Elise Yablon: I actually enjoyed this album. Given that I’ve really only listened to Osbourne’s music passively, I’m not going to compare it to his other full albums, but on it’s own, Ordinary Man is a well-composed set of songs, most of which are memorable and very easy to listen to.

Listening to it within the context of when the songwriting took place, you can absolutely tell what Osbourne’s mindset was. The most impactful songs on the album are the ones where he’s either being contemplative, brutally honest or dealing with mortality (“Ordinary Man,” “Under The Graveyard,” “Today’s The End”). There’s something about the weathered-ness and expression in his voice that really make them stand out.

I think that the reason the album leans a bit toward the pop-y side is because of producer Andrew Watt. From reading about him, he seems like he’s familiar with the rock world, but has worked with too many pop artists for it not to be at least partially his style.

Coming from someone who doesn’t really mind the song on its own (if nothing, it opened up a whole new audience to Osbourne’s catalog), the inclusion of “Take What You Want” as a CD/digital bonus track, while understood, is definitely a “which one of these things does not belong” choice against the other tracks on the album. Especially after how loud and chaotic “It’s A Raid” is (although the contrast between Post Malone featuring Osbourne and Osbourne featuring Post Malone is definitely something), it feels a bit out of place.

Zenae Zukowski: I want to add that I agree with Bram on Ordinary Man sounding like an epilogue album. It made me think about David Bowie’s final album, Blackstar. It’s difficult to get over the fact that Bowie didn’t know he was getting close to his deathbed when he recorded that album. Similar to Ordinary Man, Blackstar is simple and dark. I think Ozzy’s 12th solo effort is a great way to conclude his chapter with recording a full-length album. As mentioned before, there’s a lot of morbid material and some songs also have a classic Black Sabbath vibe to it. Regardless, I’m still open to hearing more Ozzy tunes in the future.