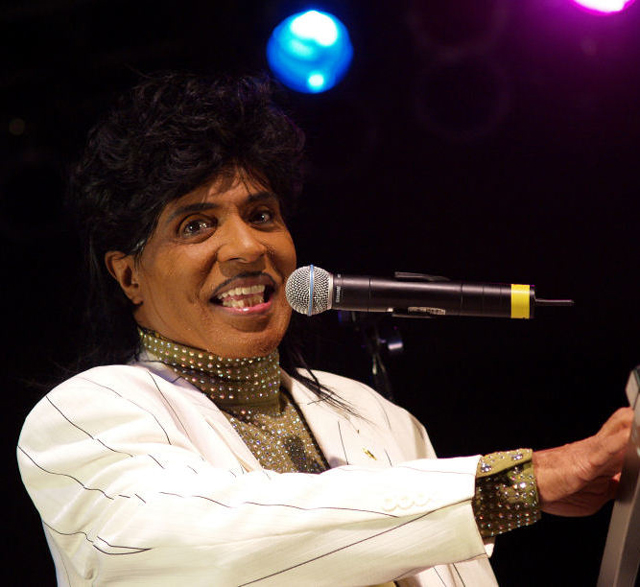 Little Richard, known as the founding father, godfather, the innovator, the originator, and the architect of rock & roll, died on Saturday (9th) at 87. CNN reports Dick Alen, Richard’s former agent, confirmed his death, revealing he died in Nashville with his brother and son by his side. The cause of death is related to bone cancer. Little Richard was one courageous, creative innovator who followed his own path, which led to being one of the pioneers in rock & roll. His charismatic spirit, along with shocking people in the 1950s with his flamboyance along with his piano-playing, “devil music” skill set, has left one unforgettable mark. Little Richard brought people of all backgrounds together with songs such as “Tutti Frutti” and “Long Tall Sally.” His influence has left a mark in many genres of music, including metal.

The rock and metal community have reacted via social media on the legend’s passing. We collected a few tributes and you can read them below:

Stunned. Got the terrible news this morning from Danny Simmons FB feed. Met Andre around the time I met Diddy in the BlackFamous 90’s. Sad for his family, his friends, his artists. #COVID19AIn’tPlayin.
🌹 https://t.co/7lSfFnBmmq

No Jimi, No Beatles No Bowie, No Bolan. NO GLAM, No Freddie, No Prince, No Elton, No Preston No Sly, No Stevie, WITHOUT Little Richard!They DON’T HAPPEN Without HIM BLAZING A TRAIL IN THE DARK in sequence, if he had his SHIRT ON AT ALL, AT THE PIANO, SCREAMING LIKE A WHITE WOMAN

Yes. And he was FANTASTIC in the studio. https://t.co/Ofhdtu9R4e

Little Richard was one of the original rock ‘n’ rollers– He was THE ORIGINAL GLAM ROCKER, and he took a lot of abuse for being in the first wave. He forged a path for all of us who followed. pic.twitter.com/LKTxaPa2S2

I was once asked, “If u could meet one person, who would it be?” I always said Little Richard. Because, to me, he was rock & roll’s most joyous, rebellious innovator.
Thank u for planting that seed, Richard. The world is a much happier place thanks to ur music.#RIPLittleRichard pic.twitter.com/kiq2VOZs8O

God bless little Richard one of my all-time musical heroes. Peace and love to all his family. 😎✌️🌟❤️🎵🎶💕☮️ pic.twitter.com/H2lzKbX3tm

Without a doubt – musically, vocally and visually – he was my biggest influence. Seeing him live in my teens was the most exciting event in my life at that point. Goosebumps, electricity and joy came from every pore. pic.twitter.com/Enno1mgfTO

Our RESPECT to the ARCHITECT of Rock N Roll #LittleRichard pic.twitter.com/QpGXLat22j

Little Richard was a performer so riveting, so extraordinary, that #JimiHendrix was his sideman and #JamesBrown his opening act. THANKYOU for everything. THANKYOU for rock n roll. https://t.co/9AiUcBaOhk

No @ledzeppelin just listen to the intro of “Rock and roll”sounds a bit like “Keep a Knockin”-met #LittleRichard a few times at the Hyatt on sunset, he was vibrant & talkative . He broke down huge walls and influenced many British lads- in turn that came back here to influence us https://t.co/i2nxFNEtlJ

I’m so saddened to hear about the passing of Little Richard, he was the biggest inspiration of my early teens and his music still has the same raw electric energy when you play it now as it did when it first shot through the music scene in the mid 50’s. When we were on tour with him I would watch his moves every night and learn from him how to entertain and involve the audience and he was always so generous with advice to me. He contributed so much to popular music. I will miss you Richard, God bless.

I grew up on the music of Little Richard. He was one of my fathers favorites and therefore he became one of mine. He was an amazing musician, writer and singer who always delivered a song with an unmatched level of energy and conviction. He was also one of a kind in terms of personality. A true innovator. My dad met him once and Little Richard said to him “I bet you drive all those little girls wild” – true story! We would watch his videos often throughout the years and we loved his spirit. He was definitely a huge influence within The Sweet household. May God bless you Little Richard and rest well🙏 #littlerichard

From ‘Tutti Frutti’ to ‘Long Tall Sally’ to ‘Good Golly, Miss Molly’ to ‘Lucille’, Little Richard came screaming into my life when I was a teenager. I owe a lot of what I do to Little Richard and his style; and he knew it. He would say, ‘I taught Paul everything he knows’. pic.twitter.com/96bOzphhs8

Although he had a good run, making it to nearly 90 (light years in rock’n’roll), yesterday’s announcement that #LittleRichard has left us leaves a gaping hole in music and the world at large (continued)https://t.co/e1s82JRNrt pic.twitter.com/czFU0o4jsg

RIP Little Richard, a very sad loss. My thoughts are with his loved ones.⁣
⁣
It’s Little Richard’s songs that pioneered rock’n’roll. I got to hear him and his band at the Newport Lounge in Miami and boy were they good. ⁣ pic.twitter.com/JXgahhJAfk

Sadly, Little Richard passed away today. A founding Father of Rock And Roll, his contributions simply can’t be overstated. I had the honor of meeting Richard in his later years and was awed by his presence. He told me, “I am the architect of Rock And Roll.” Amen! ..Rest In Peace. https://t.co/ceQuNU6pkF

R.I.P. Little Richard!!!! You were one of the PIONEERS of Rock and Roll…Without you, a lot of us would be playing a polka somewhere!!! Go to sleep King!!!! The band upstairs just keeps getting better!!! #Godblesstheking pic.twitter.com/gxWQsEoBM0

I grew up on the music of Little Richard. He was one of my fathers favorites and therefore he became one of mine. He was an amazing musician, writer and singer who always delivered a song with an unmatched level of… https://t.co/pQcNAdSVBv

⚡️Little Richard⚡️The architect has left the building. I saw him headline a 50’s show at Madison Square Garden in the early 70’s. It was like being part of a Rock&Roll hurricane. RIP creator. #LEGEND #GOAT

So sad to hear that my old friend Little Richard has passed. There will never be another!!! He was the true spirit of Rock’n Roll! pic.twitter.com/yU1EJmjejU

Let’s all let out a WOOOO! for a true rock and roll original, Little Richard. https://t.co/8vvGCw2gXo

I was once asked, “If u could meet one person, who would it be?” I always said Little Richard. Because, to me, he was rock & roll’s most joyous, rebellious innovator.
Thank u for planting that seed, Richard. The world is a much happier place thanks to ur music.#RIPLittleRichard pic.twitter.com/kiq2VOZs8O

I’m very sorry to hear about Little Richard. He was there at the beginning and showed us all how to rock and roll. He was a such a great talent and will be missed. Little Richard’s music will last forever.
Love & Mercy, Brian pic.twitter.com/kcak6Rf4Re

LITTLE RICHARD Is A Cornerstone In The Very Foundation Of Rock & Roll. An Icon. A Songwriter And Performer With A Personality To Match. RIP Superstar. pic.twitter.com/Sdl6Yh59ex

In the late 1980s, I was walking down Hollywood Blvd, a black limo drove by slowly, Little Richard waved at us from the back window with a crazy look on his face. A giant in Rock and Roll music.

RIP…HUGE Influence & Inspiration on how I started projecting my voice…HUGE…Still Astonishes Me When I Hear Him Sing…
💖💖💖
Little Richard Dies At 87 | HuffPost https://t.co/tcgNl1iIu5

RIP one of the greatest ever. 😞Little Richard, Rock Pioneer Who Broke Musical Barriers, Dead at 87 – Rolling Stone https://t.co/F2XyTgZhbw

RIP To one of the originators of Rock n Roll https://t.co/fv19pIgwYI

I just heard the news about Little Richard and I’m so grieved. He was my shining star and guiding light back when I was only a little boy. His was the original spirit that moved me to do everything I would do.

Our thoughts and condolences go out to Little Richard’s family and friends during this difficult time.