This September, Iron Maiden will once again headline the Rock In Rio festival in Brazil. Before that, though, the group will warm up by performing seven special shows in the U.S. Hitting markets like Raleigh, NC and Kansas City, the trek will feature a very special guest opening up for Maiden: Megadeth.

However, Maiden has something even more special slated for their stop at the San Manuel Amphitheatre in San Bernardino, CA. In addition to Megadeth, the show will also feature sets from Anthrax, Testament, Overkill AND Sabaton. Seeing those five bands on the same stage alone is a killer show, but the fact that Iron Maiden will also be headlining might make this one of the biggest metal events in the U.S. of 2013. The only disappointing thing about this is that it’s only one show.

Singer Bruce Dickinson had the following to say about the band’s decision to play a short trek in the U.S.:

“As Maiden fans know, we’re going back to Brazil to headline Rock In Rio again, so we thought that on our way down south we should certainly stop off and do a few more shows in the U.S. if we possibly could. We especially wanted to try and play some more cities we’ve not visited for a while, so we’re really excited about seeing our fans again in places we’ve not been to in over a decade, and in some cases over two decades, and for our first-ever visit to Raleigh! We’ll be bringing with us the same full production we had on the Maiden England tour in North America last year so fans can expect to see the huge lightshow, stage set, various incarnations of Eddie, plenty of pyro and all kinds of other exciting stuff.”

“We know how popular the History Of Maiden tours are with fans of all ages and we love visiting cities we haven’t been to in many years as it gives us a chance to play to new audiences. We had a huge amount of fun with the set list for this Maiden England tour when we opened in North America last year as we got to play songs we had not played in a very long time, like ‘Seventh Son,’ ‘The Prisoner’ and ‘Afraid To Shoot Strangers,’ as well as fan favorites like ‘The Trooper,’ ‘Aces High,’ ‘The Clairvoyant,’ ‘The Number Of The Beast,’ ‘Wasted Years’ and ‘Run To The Hills.’ That opening leg of the tour was so enjoyable for the whole band, we’re really looking forward to coming back to see our fans again and a lot of new faces too!”

Check out a complete rundown of Maiden’s September U.S. mini-tour after the jump. 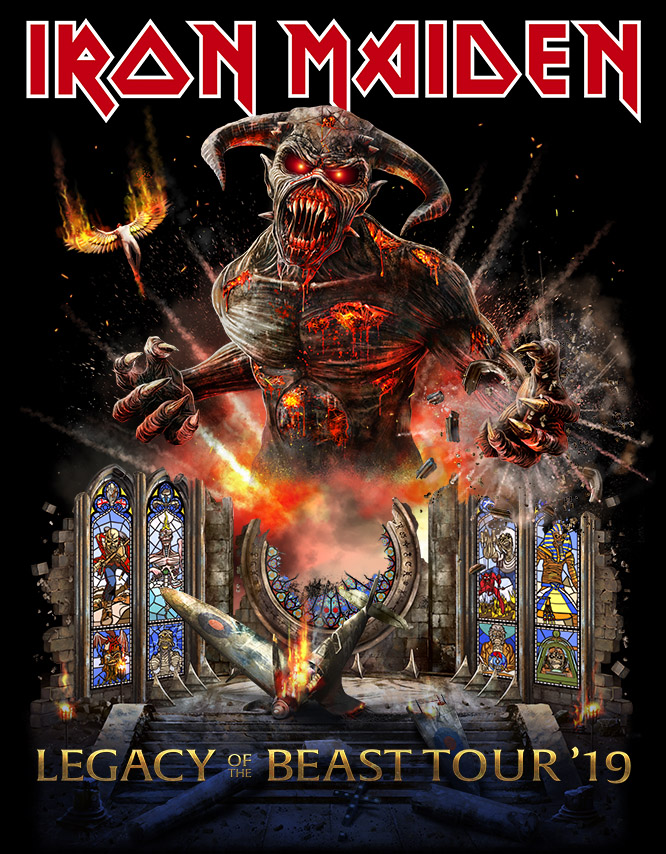