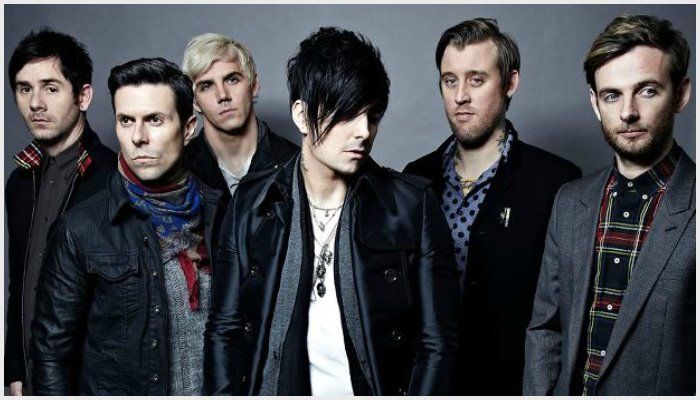 Former Lostprophets bassist Stuart Richardson was on the “Sappenin’ Podcast with Sean Smith” and talked about everything that went down after frontman Ian Watkins was charged for child sex offenses.

During the episode, Richardson reiterated that the band had no idea about Watkins’ crimes and only knew about his drug addiction. He also explains why him and the other members decided to form No Devotion soon after the controversy.

“We didn’t catch our breath after the whole thing went down with Ian. So I was like, well ‘fuck if that’s gonna be the thing [Ian‘s crimes] that’s on my fucking gravestone.’ Like ‘oh that guy was in that band with that fucking prick.’ You know what I mean? It’s like fuck that. I’m gonna do my own band immediately.”

When speaking about the early days of No Devotion, Richardson mentioned how it was all a blur:

“To be honest it was a blur. Because at that time when we were writing the [No Devotion] record [Ian‘s] trial was going on. And it was a car crash. And unfortunately my wife couldn’t stop reading Twitter. So she would see like death threats for my kids. Death threats for me. Death threats for everyone in the band. ‘They knew, they knew’. Just vile, horrible shit. And part of me understands why people would expect us to know. Because we were in the same band. But sadly that wasn’t the case.”

According to the bassist, Watkins didn’t really get along with the band and his drug addiction was getting in the way with shows, most notably Warped Tour.

“I don’t think many people know this, but before the band broke up. There was a show on ‘Warped Tour‘… towards the end of 2009 to 2011 we realized Ian had a depressingly sad drug addiction. It just snuck up on us. Because unfortunately we were living in L.A. and he was living back home [in Wales.] We didn’t see him fucking nine months of the year. And we realized how bad it was and we had an intervention with him.

And we said ‘Look, if you don’t clean up your act, you’re fucking out. This band is done.’ So [in] 2012, finally he got his shit together, and we went on ‘Warped Tour‘ and he was sober and he was singing better than he’d ever sung in his life.”

Watkins sobriety didn’t last for long as he was barely able to perform during a Start Something performance.

“I’ve never been so embarrassed in my life as playing that show. He didn’t move for the whole set. Sung the wrong words. It was like ‘This is our fucking legacy. This is supposed to be the thing we’re remembered for and you want to setup our future by doing this badly? This fucking sucks.’ So we all wanted to quit after that show. We were like ‘Look, you gotta figure your fucking shit out. Otherwise you’re fucking out of here.’”

Apparently Watkins “had his own dressing room” and the rest of the band didn’t hang with him:

“It was just getting to the point where none of us could stand being in the room with him. From day one he always rubbed me up the wrong way a little bit. But I personally thought it was my problem and not his problem. I was like ‘Am I just jealous of this guy?’ Literally I was just trying to like, it wasn’t because I thought he was what he was–there was no inkling of that. But he was just so fucking arrogant. But at the same time, I thought he was just kind of playing the part. And he kind of was as well.

So I always felt a little fucking weird around it all. But at the same time, I just thought he was being a fucking rock star. His brand of rock star was the more douchey kind of rockstar. But still, rock stars are kind of douchey sometimes. It’s all part of the fucking circus. Maybe in today’s climate the douchey rock star stereotype would never fucking fly. But it did in 2000, and there you fucking go. Unlike what we know now, [it] doesn’t really reflect what we knew in 2000. We learn things as we grow as a society.”

Continuing on about the ill-fated “Start Something” show, Richardson added:

“So after that show we had word with him–maybe not that show, but at some point we were like ‘We’re not going to see you for two months. The next time we see you, you better be good. You better have done some stuff.’ So he checked into rehab, he was going to the gym, he was like sorting himself out. I saw him two months later at a show and he was fucking on it. Super, super nice. Super fucking clear-eyed and clear skin and everything…”

“We went on ‘Warped Tour‘ and everyone was like ‘dude, your band’s crushing it right now. You’re fucking killin’ it.’ And one night [Ian] was like ‘I’m gonna go away for an hour, I’ll be back.’ We were trying to keep an eye on him, to make sure he wasn’t gonna get himself in a position where he would do drugs or you know what I mean? He was like ‘I’m gonna go do something with a friend of ours’ we knew. And we were like ‘sure’ because we knew she’d look after him.

An hour later we see her and we’re like ‘hey, where’s Ian?’ And she’s like ‘What’d ya mean?’ And we were like ‘Ah god.’ So he ended up going off with some girl, doing a fucking ton of drugs. And then we drove to the next show… So he was like 7 hours away.

The next day, [‘Vans Warped Tour‘] goes around the rotation… you never know what time you play. So we’re on at 2 and we’re like that might give him time to get down here. So we call him at 7 in the morning, ‘If you leave right now’, I’m doing bad math, ‘If you leave right now, you’ll get there on time.’ [He replied] ‘I’m running a bit late.’”

Luckily the band was able get a later time but that still didn’t matter as Watkins still was hours away. The band performed with keyboardist, Jamie Oliver on vocals.

“So I come off the stage, fucking livid. Go on the bus, Ian‘s on the bus. And I’m like ‘nice one.’ And he gives me some shit. And I black the fuck out and I’m laying punches into his face. I’m not fucking proud of it. But I’m laying punches into his face for ten seconds or ten minutes. I don’t know. And I’m a big boy compared to him, so I’m not proud of this. And then he gives me this fucking look after I hit him.

And I had this can of Monster Energy in my hand and I smashed this fucking can into his head. And I’m like ‘fuck’, I go outside and puke. And for the next three weeks he’s like black eyes, cut on his face and I’m like feeling fucking horrible about the whole thing. And that’s what I did when he missed a show. You know what I mean? If I knew anything, if I had any inkling about any of that shit [his crimes]…”

Richardson talked about going into depression when finding out the extent of Watkins’ crimes and how the band didn’t speak out on Watkins for some time due to not knowing what was going on.

“That was why we didn’t say anything for a year. ‘Cause we knew, like of course you would think that. We’re not stupid. We’re not gonna come out and say ‘Fuck you, don’t fucking say we’re a part of this.’ It’s like look, we don’t know what’s going on right now either. We’re literally figuring this out with you.”

The bassist delved into the impact this had on the rest of the band members careers and livelihoods and the considerable lost they faced.

“I think we felt at the time, considering what was happening, fuck our feelings. Because we’re not really the victims in this right now. Even if we are victims… because you gotta remember that was our livelihoods. That was our pension. That was everything for us. That was our income, our only source of income. It was our nest egg. It was everything. We worked 20 years in bands doing that thing, this was the thing which you worked towards to build something so you can have better lives in the future.

Imagine you had a job and then someone immediately stopped your job, stopped all your payments and then took away all your money you had for your future. And everyone’s like ‘Fuck ’em, they knew [about Ian.] You’re like ‘oh my god.’ You have no idea what we lost. We would never like… I’m still dealing with that today. I’m trying to figure out what to do next…”

Unfortunately, not many people had Richardson’s back and many of his “so called friends” did not help at any point.

“So many people that I knew in Lostprophets who were my friends, who said they would help me at any point, did not. A lot of people did… But 80% of them didn’t. Didn’t return phone calls and if they did it was the most blasé bullshit ever. Every friend I have now is due to the people I’ve met since that day and they’re the best fucking people. Because I know that they’re on the level.”

You can check out the entire episode below: