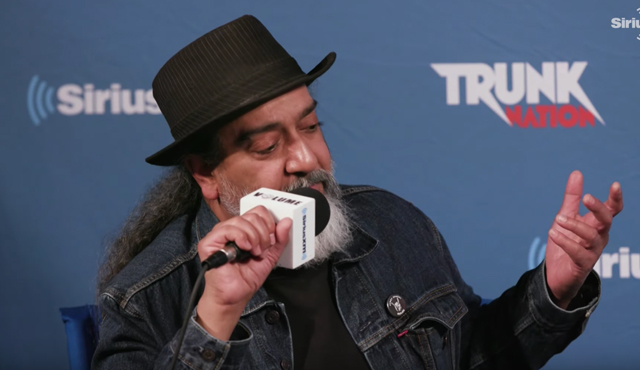 Soundgarden may have effectively shut down with the death of frontman Chris Cornell in 2017, but that doesn’t mean new music from the band is out of the question.

In a new interview with SiriusXM’s Trunk Nation LA Invasion, guitarist Kim Thayil told Eddie Trunk that it is “entirely possible” that a new album from the band could still be released, as the band had been working on new music at the time of Cornell’s passing:

“It is entirely possible, because that’s what we were doing… We definitely have another record in us. Stuff that’s written, stuff that’s demoed and recorded — certainly. All it would need is to take the audio files that are available. I’d tighten up the guitar stuff that’s on there, add other stuff. Ben [Shepherd] does the bass. Matt [Cameron] is able to get the drums he wants. We can get the producers we want to make it sound like a Soundgarden record. And yes, we can totally do that.”

The only thing holding them back, in fact, is that the band doesn’t own the files to those sessions. When asked if there were any obstacles to releasing that new music, Thayil said:

“there shouldn’t be — there really isn’t — other than the fact that we don’t have those files… And I think that will happen. It would be ridiculous if it didn’t. But these are difficult things — partnerships and property.”

This isn’t the first time Thayil has mentioned not having access to those tapes. In an interview with Music Radar from July, he expressed difficulty in getting the necessary files to finish the album.

“We’ve asked nicely, we’ve suggested that this will benefit all parties, if the band could just have these files, and we could finish the songs we were working on. But there seems to be some confusion amongst various parties as to what that would entail and how that works, and who that would benefit.”

Despite the possibility of releasing the band’s unreleased recordings, don’t expect Soundgarden to start recording with a new lead singer any time soon.

“Reasonably, you’ve got a big part missing. So, I think in terms of the Soundgarden catalog, that’s still gonna be active as best as it can be. In terms of unreleased recordings, live material, I’m still gonna attend to that; that’s my gig. I love that. Let’s make records.”

That goes for touring as well. Said Thayil, “I do not see, given the commitments that other bandmembers have, given our sentiments and love for Chris, I do not see us reconfiguring a tour or anything, as other bands have done in the past, without him.”

“This is really complicated, but I’ve known Chris since I was a kid, basically — we grew up together, our early 20s. You want to honor the work and legacy you did. Is it best to regard it with dignity and let it rest? Do you want to honor it by celebrating the music and work that he’s done?

This has been difficult for a lot of people in the family and the band, and I think our conclusion was that. I understand people are complicated, and experience and life is a bag of tricks, but… I don’t know. I think we reached a conclusion that we thought was correct.”

Remaining members Thayil, Shepherd and Cameron last performed together in January during a tribute to Cornell.

In July, Soundgarden released a concert film of their Live from the Artist’s Den performance from 2013. The band’s last studio album, King Animal, was released in 2012.

Soundgarden are currently nominated for induction into the Rock and Roll Hall of Fame. This is their first nomination. The band is currently in the top five of the Rock Hall’s fan vote. Inductees will be announced in January.